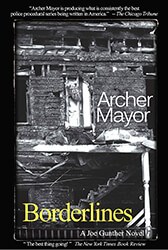 If you’re a regular reader of this blog, you know I like mysteries. Their literary quality is often outstanding, and I always love a good puzzle. This second book in Archer Mayor’s series featuring Joe Gunther hits every mark, making it one of the best police procedurals I’ve read.

Gunther, a policeman in Brattleboro, Vermont, has been seconded to the State’s Attorney at the opposite end of the state. Vermont’s Northeast Kingdom is an isolated, rural area far from the state’s scenic mountains and tourist destinations, and depressed economically, even in 1990 when this novel came out.

He’s familiar with the area, having spent childhood summers here with his aunt and uncle. He’s looking forward to time with his now-widowed Uncle Buster, whose benevolent support he could use as he wrestles with questions regarding both work and love.

In the gripping opening scene, Gunther’s journey is interrupted by an illegal shot, but he is quickly reminded that his authority as a law enforcement officer is limited in the Northeast Kingdom, which is “populated by people who had chosen to put their independence and wariness of the rest of the world above the hardships of living here.”

The pace doesn’t let up, as Gunther arrives in Gannet, the small village of his childhood summers. Ramshackle and rundown, the town allowed half of its building to be bought up by an intentional community, seen by some as a cult. Tensions between the Order and the town have grown, only to explode when a couple from Massachusetts arrives to rescue their daughter. The tension is nicely modulated, with plenty of scenes of Gunther sitting on a step with a childhood friend, walking with his uncle, or phoning his girlfriend to vary the suspense before building to a satisfying climax.

What’s best here is Gunther himself. With this character Mayor finds just the right balance of thought and action. Gunther’s quiet, unassuming voice sets him apart from sometimes brash or bragging detectives. Though there’s not a lot of soul-searching, he’s quick to acknowledge his own mistakes. We’re given all we need to perceive his sorrow at the way the village and its people have deteriorated. The loss of his childhood refuge provides shading to Julie’s story, the young woman whose parents have come to steal her from the cult.

There is one twist that seemed to come almost out of nowhere. Mystery writers have the daunting task of planting enough clues to significant plot twists so that readers think Oh, of course! Why didn’t I see that? while not so many that we guess it too soon. Mayor did an excellent job of preparing for all the plot twists here, save one, noticeable only because of the superb plotting everywhere else.

In talking about the elements in fiction, plot and character are the stars. Increasingly, though, I find myself drawn to novels in which the setting is richly evoked and becomes almost another character. Mayor does that here, brilliantly. The environment he evokes helps us anticipate and understand the people in this story, all brought to life, no matter how small their role. It also charges the mood of the story.

When I was younger, the Kingdom had been much as the name implies – a magical other world, removed from the mainstream and endowed with a specialness in the minds of those who knew of it. Its topography, both rugged and cursive, could reject and embrace, kill and nurture. It was a place where land and weather ruled, where the beauty came less from the majestic mountain views found further south, and more from the perpetual surprises that lurked behind the low, ever-present hills. Even at its harshest, the Kingdom was seductive, as when its omnipotent sky darkened with boiling blue-black clouds, low slung and pregnant with threat.

Its people, like those of Gannet, clung to this mercurial terrain mostly out of choice . . . They were independent, self-supporting, proud, and generally uninterested in what was happening outside of their boundaries . . . But, obviously, the fabric of the Kingdom had begun to strain and yield.

Even now, several decades after publication, this book is a valuable resource if you want to understand the crumbling lives of the rural poor. Mayor’s insight into his fellow Vermonters is demonstrated on every page. As death investigator for Vermont’s Office of the Chief Medical Examiner, and formerly a detective and volunteer firefighter, Mayor brings the authority of real-world experience to this spellbinding tale.

Have you read one of Archer Mayor’s books? What did you think of it? Do you have a favorite?

4 thoughts on “Borderlines, by Archer Mayor”