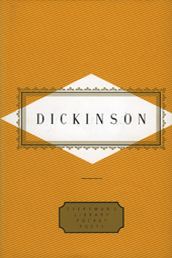 For our first meeting this year, our Poetry Discussion Group read Dickinson’s poems, a mix of famous and now-so-famous works. To prepare, I reread this collection from my bookshelf, finding notes from my schooldays tucked in its pages, enjoying old favorites and rediscovering ones I’d forgotten.

At our meeting one person remarked that almost anyone reading an unattributed poem by Dickinson would know immediately that it was by her. Why is that? It’s partly her remarkable concision—the way she can pack so much into a handful of lines—and partly her combination of whimsy and practicality.

Of course there are her distinctive dashes. In many cases, they designate a pause, as here:

In others, they indicate a modern fracturing of perception, as here:

Adored with caution — as a Brittle Heaven —
To reach
Were hopeless, as the Rainbow’s Raiment
To touch —

Ungained — it may be — by a Life’s low Venture —
But then —
Eternity enable the endeavoring
Again.

Sometimes they add emphasis to certain words or ideas.

I taste a liquor never brewed —
From Tankards scooped in Pearl —
Not all the Vats upon the Rhine
Yield such an Alcohol!

When “Landlords” turn the drunken Bee
Out of the Foxglove’s door —
When Butterflies — renounce their “drams” —
I shall but drink the more!

She can be joyous, as in the previous poem, or satirical, as here:

More often, though, she’s kind, appreciative of the world around here and aware of its transience:

Some of her poems seem straightforward, but may have layers within. Some—such as the last one—are so sweetly positive as to border on sentimentality, though never (in my opinion) crossing over. Some we found baffling, such as this one where the two stanzas seem to be separate poems, the first clear and the second bewildering (Himmaleh indicates the Himalayas).

Power is only Pain —
Stranded, thro’ Discipline,
Till Weights — will hang —
Give Balm — to Giants —
And they’ll wilt, like Men —
Give Himmaleh —
They’ll Carry — Him!

As writers we’re often advised to eliminate adjectives and adverbs, yet she deploys them brilliantly, as in this poem where it is the adjectives that give it power:

For each ecstatic instant
We must an anguish pay
In keen and quivering ration
To the ecstasy.

For each beloved hour
Sharp pittances of years —
Bitter contested farthings —
And Coffers heaped with Tears!

I have plenty of friends IRL (in real life) and online, but books too are my friends, and none more welcome than wise and witty Emily.
All the poems I’ve quoted and more may be found here.

What is your favorite Emily Dickinson poem?