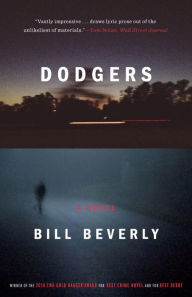 This debut novel takes us into the world of East, a sixteen-year-old lookout for a drug gang in the Boxes, a neighborhood in Los Angeles. At first the story seems like the usual Wire replica, so much so that I hesitated to go on. But than Beverly takes us on a deep dive into the persona East has constructed for himself. This young man who “had never been a child” is good at his job, moving people along, tracking his crew. Yet there is much more to him.

He spent his days watching, keeping things from happening, and sometimes he could see things coming . . . Sometimes this watching wound East up. It was never finished . . .

Days began sharp and tuned themselves sharper, until about the time it was over, the world made a quivering sound, like a black string humming. He could barely stand to be near things.

After a massive police raid, East is sent across country with three other members of the crew on a task assigned by the head of the gang. They are going to Wisconsin to take out a witness in a case against their gang. They outfit themselves in Dodgers gear because, as one of the boys says, white people love baseball and will think them harmless. I like the title, with its echo of Dickens’ Artful Dodger.

The road trip is the best part of the book for me. Filtered through the awareness of a boy who has never been outside his neighborhood before, mountains and diners and even other drivers become something mysterious and alien. That the boy is black and negotiating in a world of white people (other than those who buy drugs) for the first time makes his journey more striking.

Mountains stood before them, above them like in LA. But in the Boxes, the mountains were only a thing, like a wall or a tree, a sun-baked ridge above the valley full of everything. Here the ground was nearly empty of buildings and the mountains were like people, huddled figures, blue and grey and while. So high. They were unmoving stone. But they tore East’s eyes from the boys in the van and the unidentifiable people motoring up the same road.

The interplay between the four boys, one of them East’s little brother, is fascinating too. However, the story peters out about halfway through, and the climax seems contrived. Some others in my book club disagreed about the climax, saying it was as shocking as the raid at the beginning, making it a suitable bookend.

Although East himself doesn’t seem to change much in the course of the book, our understanding of him deepens. He proves to be a truly original character, innocent and honorable in some ways, he can also be harsh and ruthless. It’s hard not to care about this young man as he tries to find a place for himself in the world.

Some members of my book club found the dialect hard to read. I was grateful that I’d gotten it as audio book. I find that I don’t have a lot of patience for reading dialect. I had to abandon one of our book club books a few years ago that was set in Ireland. It was just too hard to read.

As you can see from the excerpts above, the writing is amazing. A little more attention to story structure would have made this an outstanding novel.

Can you recommend a novel about a road trip (other than Kerouac’s books)?