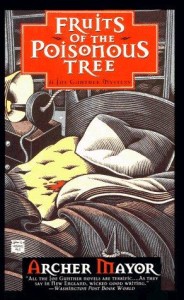 I’m continuing to read Mayor’s mystery series featuring Vermont detective Joe Gunther. In this fifth book someone close to Joe is the victim of a terrible crime, and he quickly realises that the best thing he can do to help—indeed, the only thing—is to find the perpetrator as quickly as possible.

However, that’s not so easy when police protocol calls for him to stay out of the investigation. His boss strikes a deal with States Attorney James Dunn, involved in a tight reelection race, that allows Joe to participate while his second-in-command runs the investigation. Also, Joe must be babysat, i.e., accompanied by another cop wherever he goes.

This is one of the most exciting of the Mayor novels I’ve read so far, with several nail-biting chases and standoffs in surprising locations, phsyical danger for Joe and others, and plenty of personal conflict for Joe as he examines his own motives and capabilities.

But what I most enjoyed were the descriptions of the town of Brattleboro itself. Often what draws me to a mystery series is the use of location as a character: Boston for Robert B. Parker, Baltimore for Laura Lippman, Paris for Cara Black, Venice for Donna Leon. Even fictional locations work, such as Three Pines in Louise Penny’s series.

Mayor’s descriptions of Brattleboro are brief but capture its personality. Here, for example:

Brattleboro is an unusually mixed bag of a town. An icon of the previous century’s industrial might, it has an imposing downtown of stolid red-brick buildings, a few obligatory tree-lined neighborhoods of impressive Victorian showpieces, and a vast number of standard, modest, updated nineteenth-century homes—in good or poor shape depending on the locale. The whole thing rests on a broken-backed, topsy-turvy, creek- and river-creased patch of land . . .

Sprinkled throughout, however, just off the well-traveled thoroughfares, Brattleboro has a contrasting scattering of neighborhoods unique into themselves. They are poor or middle class or shyly redolent of old money, but they all share a separateness from the whole, as if, during the town’s early evolution, hidden genetic strains of other far-distant communities were subversively introduced.

Now that I’ve gotten to know the town a bit better, I can recognise some of the neighborhoods and follow Joe’s slippery race through falling snow to a street near where I live. As with Boston and Baltimore, my own knowledge of the place makes me nod with recognition at Mayor’s descriptions of the town’s character.

Ian Rankin once said he began writing his enormously successful Rebus series in order to get to know Edinburgh, his then-new home. As in reading Rankin’s books, Mayor’s series rewards the reader with a cornucopia of pleasures. You can read them for the puzzle or the excitement of the chase; you can read them to immerse yourself in a unique location; or you can read them for the satisfaction of watching a character like Joe Gunther grow and develop. I hope you enjoy them as much as I do.

What mystery series do you enjoy? What do you like best about it?