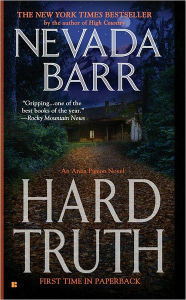 I’ve enjoyed the Anna Pigeon mysteries by Nevada Barr ever since they first came out. Anna is a park ranger, and each book takes place in a different national park. Barr herself worked in national parks during the summer, so she brings experience to her stories.

I know she also does extensive research for each book. One of her books, Blind Descent, is based on an actual incident in Lechuguilla, one in which my brother was involved. He was shocked by how accurate her details were, not just of the cave itself, but caving technology, and the kinds of people who would be on such expeditions (though there were no murderers on his descent!).

I heard her speak once, and loved her description of how she learned to write mysteries. Her first book was surprisingly accomplished. It deservedly won both the Agatha and Anthony awards for best first mystery. Barr said she learned by taking a few favorite mysteries and taking them apart. She studied them for months trying to understand what worked and what didn’t. I think this is a great way to learn how to write! After all, it wasn’t that long ago that there weren’t MFAs in creative writing.

Hard Truth is the 13th book in the series and finds Anna working in as District Ranger in Rocky Mountain National Park. When she arrives, she finds a team that has been traumatized by a six-week search for three missing girls. They come camping with a group of young people under the guidance of their pastor. The girls have never been found, and the active search called off.

Oddly, the parents did not participate in the search. Instead, they prayed. Part of what I would call a cult, their home is a compound run by a large bully of a man whom everyone is afraid of. Anna hears that the sect has broken off from the Mormons, finding them too worldly and liberal.

A parallel story gives us a young woman, Heath Jarrod, who has come camping with her aunt. They are staying in the “handicamp” because Heath is confined to a wheelchair since a climbing accident, leaving her bitter and angry.

Barr mixes up these characters in events so suspenseful that a long car ride passed in a flash. I like Barr’s writing, her detail about the life of a park ranger, and her descriptions of the parks. This book, sadly, had less about the park and more about the evil on the loose.

One of my friends told me she stopped reading Barr’s books because she finds them too violent. I’ve thought about her comment while I’m working my way through them again; I find it interesting to read a series consecutively sometimes. I have to say, this book is particularly gruesome. In fact, the last few have been quite violent near the end, but this one verges on being a horror story. I’m almost afraid to read the next. My friend might be right.

What mystery series have you enjoyed?