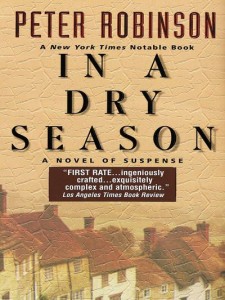 This summer’s drought and the dire predictions of a shortage of potable water made me think of this mystery from the author of the DCI Banks series. Of course, the metaphorical interpretation is just as important. The disasters roaring across the U.S. and the world have left many writers—and others—paralysed.

It’s been 20 years since I first read this book and found it even more fascinating this time around.

A prolonged drought has uncovered a Yorkshire village that had been buried under a reservoir for decades. Although it is supposed to be off-limits, a local boy can’t resist exploring the buildings and unexpectedly discovers a skeleton. Banks is sent to investigate by his Chief Constable as punishment for an earlier clash between the two.

Assisted by the local DS, Annie Cabbot, Banks tries to identify the skeleton and reconstruct the events of 50 years earlier. At the same time, the events resonate with him, reminding him of Jem, a friend from his younger days who came to a sad end. Then there’s Annie Cabbot. Still mourning the end of his marriage ten years earlier, for the first time Banks feels the stirrings of attraction.

As if those threads were not enough, interwoven with the investigation and Banks’s memories is a first-person account by a then-young woman of the village during the Second World War, as well as the story of an elderly novel-writer being harassed by anonymous phone calls.

A writer in the middle of writing their first novel remarked to me the other day, “This is hard! There are so many things to keep track of.”

It’s true. Novels have so many moving pieces, it’s hard to keep track of them all. Has this minor character appeared often enough that a reader wouldn’t have forgotten them? Did this theme work its way into every part of the story? Did I remember what season it was, what day of the week, what color that character’s eyes are? Writing a mystery is even worse; you have all those red herrings and unreliable characters to work in.

I’m stunned by how well Robinson manages the complexity of his storylines here. I use spreadsheets, outlines, journals and hand-drawn maps, and have replaced physical index cards with virtual ones. It’s not uncommon to peek into an author’s study and find one or more walls completely covered with notes and drawings and maps. Novelist Laura Lippman sometimes posts pictures of her insanely complicated charts.

I don’t know what Robinson’s process is, but the effect here is amazing. So many disparate threads, each with their own continuity, bouncing off each other. The timing is perfect. Just when you are starting to think, What has happened to . . .? that thread reemerges.

And with each scene, information emerges prompting new questions, heightening the suspense, making me ask—as my three-year-old friend often bursts out with in the middle of a story—What’s going to happen? Best of all, everything that does happen grows organically out of the story, without artificial dramatics.

Reading and thinking about an amazing story helps to bring rain to my dry places. Writing a novel is hard, but Peter Robinson makes it look easy.

Have you read any of the Inspector Banks series? Is there another mystery series you’d recommend?

2 thoughts on “In a Dry Season, by Peter Robinson”