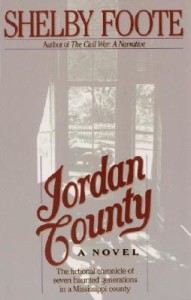 It was the author’s name that caught my eye. Shelby Foote is of course the author of The Civil War. I didn’t know he wrote fiction, but this is only one of several novels. Well, it is subtitled A Novel. In reality, it is that always fascinating hybrid: a novel in stories.

Here it is in a novella and six other stories, all set in the fictional town of Bristol in Jordan County, Mississippi. They are the opposite of a traditional historical narrative because they start in 1950 and go backwards in time to 1797, lending a curious perspective, an unfolding of causes, each absorbed in its present moment, but leading up to the time when Foote was writing.

The first story is begins with Pauly arriving in Bristol on the train. A 25-year-old veteran, presumably of the Korean War, he walks through the town, perplexed by the new names on stores, the traffic lights, the new parking meters. A distracted man approaches.

“How’s that?” The worried look did not leave the man’s face.

These are stories about change, adjusting to it, creating it, fighting it. Some characters are caught in the shredded remnants of the past while others launch themselves into the future, all while we move through the Jazz Age, across the turn of the century, into Reconstruction, the war itself, the beginnings of the town, all the way to the clearing of the Choctaws.

Almost nowhere is more haunted by dreams of the past than Mississippi, home of William Faulkner who famously said “The past is never dead. It’s not even past.”

In giving the life of Hector Sturgis, the novella tells of several generations of the Wingate-Sturgis family, centered in the mansion built by his grand-grandfather in 1835. On the first page we’re told that the mansion has been torn down after the death of Hector’s mother, as specified by her will, and turned into a public park.

Introduced almost as an omen of what is to come, the county is in the grip of the 1878 yellow fever epidemic when Hector is born. The description is eerily familiar: railroads and steamboats shut down, people confined to their homes.

Growing up, Hector inhabits a liminal space. Dressed by his doting mother as Little Lord Fauntleroy, he has no friends. The boys in town are briefly in awe of him but quickly turn to jeering at him. His domineering grandmother wins the power struggle over him leaving his mother seething with resentment. Spoiled, untrained in any practical skill, he is poorly equipped to take his place as a man. Yet he does have one remarkable skill.

As the story weaves and turns it began to remind me of Faulkner’s Wild Palms, that fever dream of the South, of unexpected love, of omens and tragedy and hauntings. Still, just as in the larger novel, we can see the unspooling of whims, decisions, and actions whose long tentacles entangle Hector and his family and threaten to drown them.

There’s brilliant choreography, within each story and in the novel as a whole. Foote releases information, ties things together with the most gossamer allusion, gives us the taste and feel of life in the past. These days I’m a vessel brimming with sadness for our world; Foote helps me see how we got here.

Have you read a novel in stories? How did the form work for you?