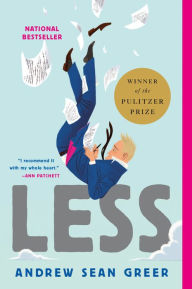 This Pulitzer Prize-winning novel was my book club’s selection this month. What’s it about? Well, imagine Eat, Pray, Love with an insecure gay man, an author who visits double the number of countries trying to outrun his anxieties.

Arthur Less—no subtlety there, so I should have been warned—is our protagonist. About to turn 50, his latest book has been rejected by his publisher, and the much-younger man who has been his occasional bedfellow is about to get married.

Less is a sad, colorless person. Alone, he’s still riding on the fame of his long-ago first novel and memories of his early long affair with a much older famous poet. In those days, he was the youngster staying quietly in the background while his lover and his famous friends carried on.

Sounds a lot like Franny in Ann Patchett’s Commonwealth. As in that novel, the characters here are unpleasant—especially needy, insecure Less—and are played for laughs. His bumbling missteps and failures, together with random blows of fate, leave him suffering even more anxiety. It is all meant to be funny, but it’s still not a kind of humor that appeals to me.

Normally I’d have stopped reading, but was looking forward to meeting with my book club. Also, I kept wondering why in the world it won the Pulitzer. Some members of my book club found it amusing and agreeable, but all found it light-weight and definitely not worth a Pulitzer. One person suggested it was chick lit for gay men.

Certainly it’s well-written. Greer’s sentences are terrific, and the story is clear and consistent. Also, the descriptions of the various countries are superb. A device Greer uses is a narrator who seems to know Less. The narrator isn’t identified till the end, but it’s pretty obvious long before that. One person pointed out the clever allusions in the text to other books. We thought there must be more we didn’t recognise, but certainly enjoyed the ones we found.

So, not a bad book if this sort of character and this sort of humor appeal to you. Most of the reviews I saw were positive. It might be a book you’d enjoy. Just don’t expect there to be much to it.

When choosing your next read, are you influenced by prizes it’s won, the endorsements on the cover, or by reviews?