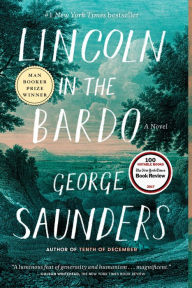 This surprising bestseller is set in the Oak Hill Cemetery in Georgetown where Abraham Lincoln’s son Willie has been temporarily interred. A favorite in the household, 11-year-old Willie contracted typhoid fever and died the very night of a huge ball at the White House.

Saunders was intrigued and moved by accounts that Lincoln in his grief had actually visited the crypt in order to hold the boy’s body.

Bardo refers to an intermediate state between death and reincarnation. All the characters, besides Lincoln and the cemetery’s keeper, are those souls who have not moved on but remain in the cemetery. They do not understand that they are dead; they believe they are “sick”, that their coffins are “sick–boxes”, and that they will at some point return to their interrupted lives. They are shocked and saddened when joined by Willie, not only because he is a remarkable child, but because children usually move on right away.

I didn’t want to read this book. I had read a few reviews of it, so I knew a bit about it and didn’t think that it was a book that I would enjoy. Then my book club chose it.

There were two reasons why I didn’t think I would enjoy it. For one, I don’t like to read stories about the death of children.

Also, I understood that it was experimental fiction. Its format consists of brief quotes followed by the name of the speaker, almost like an inverted screenplay.

It’s not that I don’t enjoy experimental fiction, but I rarely find it as enjoyable as more traditional narratives. Of course, there are exceptions. I was delighted by A Visit from the Goon Squad, by Jennifer Egan. I knew that Saunders’s book is narrated by the dead, like Spoon River Anthology. I have always enjoyed these poems by Edgar Lee Masters; in fact, one of my favorite quotes comes from his Lucinda Matlock. She says, “It takes life to love life.”

Here, I feared that the cacophony of voices would be overwhelming. In fact, though, they flow together very well. The three main narrating souls have distinct voices in the beginning of the book, but soon their voices become quite similar. I assume this was a deliberate choice by the author to make the story read better and not feel jerky.

Other chapters are a collection of excerpts from historical sources, some real and some imaginary, which give us the facts about the ball at the White House, Willie’s death, and the war. Amusingly, many of these accounts conflict with each other. They also reveal a contemporaneous understanding of what was going on in Lincoln’s mind. The year is 1862. The Civil War has been going on for one year, and the casualties are mounting.

While there are a couple of intensely moving moments in this book, I found reading it more of a cerebral exercise. I appreciate the form that Saunders found in which to tell his story and how well he executed it. I also appreciate the subtle and surprisingly powerful ending.

Still, I was surprised that it became such a big bestseller. True, Saunders was already a popular author. And there is a good bit of humor as well as those few profound scenes. It is also surprisingly easy to read, though I wonder how confused I’d have been at the start had I not read those reviews first. If I expected a bit more substance in the novel, then that is my failing rather than the author’s.

Have you read any experimental fiction that you thought was especially successful?

2 thoughts on “Lincoln in the Bardo, by George Saunders”