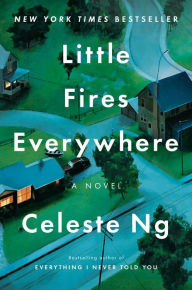 Elena Richardson is living the perfect life in her perfect suburb of Shaker Heights. Although Elena is proud of the suburb’s idealistic beginnings, she’s thankful for its current rule-bound incarnation which fits her own obsessively programmed approach to life.

Well, it would be perfect if it weren’t for her rebellious daughter Izzy. Luckily Elena doesn’t know what her other two children are getting up to. What she does know is that her problems really began when artist and single-mother Mia moves to town with her daughter Pearl. Free-spirited Mia reminds Elena of her own choices and makes her wonder if she’s not missing out on something.

Things really come to a head when Elena’s friends adopt a Chinese baby that was left at a fire station, and Mia champions the baby’s mother who has been searching for her now that she can support her. The issue of cross-cultural adoption is an important one, and the usual arguments for who would be the baby’s best parent are brought out.

Writers are often asked where we get our ideas. A novel can start anywhere: a news article about some incident, a commitment or concern with a particular social issue, even an image of a place or person that demands you delve into what’s going on.

Before you go much further, though, you have to identify your protagonist—the person whose journey we’ll be following—and what they want deep down more than anything else. The best novels give the protagonist both an outer goal, something they are trying to accomplish, and an inner goal, some more personal need. You can make the two complimentary or oppose them, so that succeeding at one means failing at the other.

You also have to identify with what or who is keeping them from their goal: the antagonist. And there’s more: in planning a novel, writers assemble a cast of characters, people who are different from each other yet play off each other’s strengths and weaknesses.

In this story, Ng does a fabulous job of this. Her cast includes pairs of opposites, including mismatched mother-daughter duos and of course the dueling parents. There’s even a setting that enhances the strengths of one of the opposing people and the weaknesses of the other. In fact, it’s almost too carefully planned.

I felt little emotion reading this novel. I was too conscious of the chess pieces being moved around to care much about what happened. It didn’t help that the characters are so one-sided. Mia is all good—a photo of her with Pearl as a baby is even titled Virgin & Child—and Elena all bad. And unrealistic: a single mother who is making a good living as an artist and has no one in her life besides her child and the woman who sells her work? As for Elena, there may be people as strict and cold as she, but I haven’t met any. And I found at least one aspect of the ending not only unbelievable but irresponsible on the author’s part.

There’s another problem with the book. Remember what I said about starting with a protagonist and antagonist? It is unclear who these are. I’ve made it sound like Elena is the first and Mia the second, but most of the people in my book dissection group thought it was the other way around. Or the protagonist could be Pearl. Or maybe Izzy.

That said, there’s a lot of great writing in the book, plus the excellent setup and the important social issue. And many of us struggle with finding the right balance between being wild and being responsible. Most of the people in my group enjoyed the book more than I did. And it’s certainly gotten great reviews.

Have you read a novel that didn’t have a protagonist? Or had more than one?