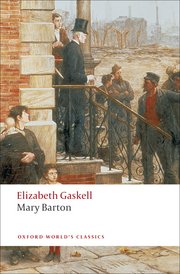 A recent post by Ellen Moody about Gaskell’s novel North and South reminded me that I hadn’t read anything by this author besides her Life of Charlotte Brontë. I set out to remedy that gap starting with this, her first novel.

Little did I know how relevant to today’s political situation it would turn out to be. As Moody said, many of Gaskell’s books, including North and South and Mary Barton, share a “radical political vision.” The author embodies this vision through characters and plot but also sometimes steps back to give the big picture and further context. Instead of being preachy, though, the novel had me fully immersed and racing to finish it. It’s a bit sentimental at times, but Gaskell manages to keep it moving.

Set in Manchester in 1839, the story concerns two working class families: the Bartons and the Wilsons. John Barton, grieved by the loss of his wife and the terrible economic distress of the time, becomes involved in the trade union and Chartist movements. He rails against the gap between rich and poor, between mill owners and workers. When his closest friend, George Wilson, remarks that Barton never liked the “gentlefolks”, Barton responds:

“And what good have they ever done me that I should like them . . . If I am sick, do they come and nurse me? If my child lies dying (as poor Tom lay, with his white wan lips quivering, for want of better food than I could give him), does the rich man bring the wine or broth that might save his life? If I am out of work for weeks in the bad times, and winter comes, with black frost, and keen east wind, and there is no coal for the grate, and no clothes for the bed, and the thin bones are seen through the ragged clothes, does the rich man share his plenty with me, as he ought to do, if his religion wasn’t a humbug? . . . No, I tell you, it’s the poor, and the poor only, as does such things for the poor. Don’t think to come over me with th’ old tale, that the rich know nothing of the trials of the poor. I say, if they don’t know, they ought to know. We’re their slaves as long as we can work; we pile up their fortunes with the sweat of our brows; and yet we are to live as separate as if we were in two worlds . . .”

Both men fall on hard times as the mill cuts back on workers (but not on the mill owners’ lavish entertainments). John Barton and George Wilson end up relying on their children’s income. George’s hard-working son Jem has long loved John’s daughter Mary, but she has been walking out with Harry Carson, a mill owner’s son. She believes he intends to marry her, but of course he doesn’t plan on crossing that social boundary.

With food prices rising and jobs disappearing, families are starving. Gaskill’s descriptions of the suffering of the poor are shocking. As she explains in her Preface, she hopes through her story to convey the desperate situation of the working poor and their resentment of the mill owners, in the hope that those who can will be moved to help through legislation and private charity.

I recently visited the Foundling Museum in London to explore the history of the Foundling Hospital established in 1739 by Thomas Coram. He was horrified by the number of babies left to die on the street by families that could not afford to feed them. The institution provided food, clothing, shelter and education, helping the grown children to find jobs or enter the military. While the hospital closed in 1954, the charity continues today as Coram.

What moved me to tears were the loving notes left for the children by desperate mothers and the displays of tokens left with them: a string of beads, a ribbon, thimble or crudely etched medallion—something unique that a mother returning to claim a child could describe to identify her son or daughter. Few could afford to return, though.

Outside, behind the statue of Thomas Coram there is a little sculpture by Tracy Emin of a mitten on the iron fence, like the tokens inside. People have tied ribbons to the nearby fence spikes.

It is children who suffer the most from the great disparity between rich and poor. Gaskell’s genius is to show us that children on both sides suffer, though differently.

What novel have you read that addresses social problems along with the characters’ story? 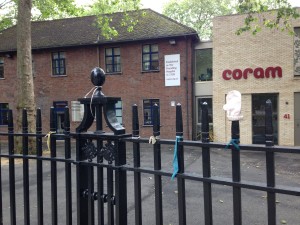