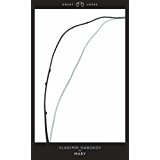 Mary (Mashenka) is Nabokov’s first novel, written in his mid-twenties while he and his wife Vera were living in Berlin. It is brief, what we would consider a novella today, and has some the characteristics we have come to expect from first novels.

Lev Glebovich Ganin is a 25-year-old Russian émigré living in a pension in Berlin, nostalgic for his lost country, and unsure what to do next. It is hard not to suspect autobiographical parallels.

The year is 1924, early in the Weimar Republic, but Ganin’s Berlin bears no trace of the gaudy gaiety I associate with that time. Instead, the city and its inhabitants are depicted as tawdry and unattractive, even repulsive. The unsubtle piling on of dingy details seems overdone, not unusual in a novice writer.

Ganin wants to move on, calling it “nostalgia in reverse, the longing for yet another strange land,” but he is marooned by depression. In the first scene Ganin and the new arrival to the pension, Alfyorov, are stuck in the elevator. Later in his career, I’m sure Nabokov would have left it up to us to see the connection, but here he makes it explicit. Alfyorov says:

“Don’t you think there’s something symbolic in our meeting like this, Lev Glebovich?” . . .

“Well, the fact that we’ve stopped, motionless, in this darkness.”

At one point Ganin cannot even rise from the chair in his room, “powerless because he had no precise desire” yet “vainly seeking something to desire.” That something is provided by Alfyorov who, unable to leave any thought unspoken, tells Ganin that his wife Mary is arriving on Saturday. His description of Mary prompts Ganin to decide that mysteriously, miraculously, this Mary must be his own lost love, their last contact some letters while he was at the front.

Nabokov uses an omniscient point of view, staying mostly with Ganin, but sometimes moving from one character’s thoughts to another’s, even within the same paragraph. Today we call that head-hopping and consider it a beginning writer’s mistake because it is disorienting for the reader, but I believe it was not uncommon at the time this novel was written. It’s been a while since I’ve read Nabokov’s later novels but remember them as staying closely with the protagonist.

Yet even with these marks of a first novel I can trace qualities I’ll value in the later books, especially the theme of memory and the delicate interweaving of past and present. Ganin and his Mary’s past is gradually revealed, as he continues to interact with Alfyorov and the pension’s other occupants. In particular, he tries to help the elderly poet Podtyagin obtain the passport and visas he needs to go to Paris. Through these interactions some sweetness and generosity begins to shade these characters and the story becomes more complex and intriguing.

This copy was given to me by my friend Hayley. It’s part of Penguin’s series on Great Loves. From the back copy, it seems they included it because of Ganin’s attachment to Mary, his first love. While that drives the plot, a stronger love here is for his lost country. Ganin’s reminiscences contain less detail about Mary than about the places where they met: a boat poled on the river amid fir and mimosa, the pavilion with its diamond-shaped panes of colored glass, the terrace of a deserted mansion shaded by lime trees.

Proust wrote, “les vrais paradis sont les paradis qu’on a perdus” which, while open to discussion, Scott Moncrieff translated as “The true paradises are the paradises that we have lost.” Nabokov’s loss of the paradise of his youth and the theme of memory are constants in his work. In contrast, Berlin had to seem unvaryingly dark and ugly.

What paradises have you lost?