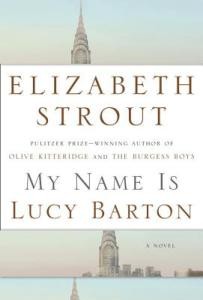 My library puts a slip of paper in books where people who’ve checked out the book can rate it. When I took out this book, I saw that three gave it top marks and one hated it. Me, I loved it.

Obviously, this quiet story is not for everyone. Lucy herself is the narrator, telling us about a time in the 1980s when she was in the hospital for nine weeks and her mother came to stay with her for five days. From the start we wonder what is wrong with her that she must be in the hospital for so long and why this is the first time Lucy has seen her mother in years, since Lucy and William’s marriage in fact.

Over the course of the five days, Lucy’s mother relates gossip from home, mostly of marriages that did not end well. Lucy’s thoughts wander over the years, touching on her brutal childhood when the family’s poverty was so great that they lived in an unheated garage with no running water and she was locked in her father’s truck while her parents were at work. She tells us about her life in New York City with her husband and daughters, though not—she insists—about her marriage.

It’s Lucy’s voice that made me fall in love with this book. Like her mother, whose voice Lucy describes as “shy, but urgent”, Lucy tells us of these things calmly, leaving us to infer the desperation underneath. Telling details—a memory of her father’s hand on the back of her head, hiding a magazine from the doctor for fear it makes her seem “trashy”, her near-envy of people with AIDS because they seem part of a community—reveal what lies beneath her surface calm.

Lucy tells us how happy she is to see her mother and reassures us that she loves her mother, but the two of them shy away from anything too personal. Their relationship is at the core of the book. As in Jeannette Walls’s The Glass Castle, Lucy’s love for her mother and apparent lack of self-pity make the book glow. She recognises that their love for each is an “imperfect love”, as Sarah Payne says. Payne is an author who, in occasional encounters, gives Lucy advice on writing that become life lessons.

In addition to the voice, what I admire most as a writer is the way Strout releases information. Among the themes of imperfect love and family is the theme of reticence. There is so much that Lucy does not say. Sarah Payne, too, is criticised as a writer who shies away from telling everything, from digging too deeply.

The story seems to ramble haphazardly, but when I went back and looked more closely, I could see how well crafted it is. The seeming randomness actually follows traditional narrative structure.

Also, things are mentioned without explanation, such as Lucy’s fear of snakes or her friend telling her to be ruthless. Then, later, we learn a bit more, and then perhaps another bit. We are never told everything, but we are told enough. As one person in my book club said, every single thing in this book has to be there.

Recently, I was thinking that I had lived in my most recent home for 17 years—which seemed like no time at all—when I was surprised to realise that 17 years was the length of my childhood. When I left for college at 17, I shook off my family and began to create my life, just as Lucy did when she married and left home. Yet those few childhood years exert a power as great as that of all the decades that followed.

In the end, though, what I treasure most in this story is the perception that it’s not so much a matter of forgiving parents, but rather a recognition that the love is there, an imperfect love, but love nonetheless.

Have you read a quiet book that turned out to be unexpectedly powerful?

2 thoughts on “My Name Is Lucy Barton, by Elizabeth Strout”