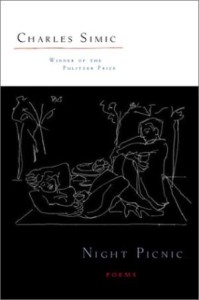 I actually read several of Simic’s poetry collections to prepare for the poetry discussion group I lead. He’s certainly well known, although I had not read much of his work before. In addition to serving as poet laureate, he has won many prizes and awards, including the Pulitzer Prize, the Griffin Prize and the Wallace Stevens Award.

One reason I had shied away from his poetry was that I’d heard it was dark and depressing. That turns out to be untrue. I actually found his work to be curiously uplifting.

Born in 1938 in Belgrade, Yugoslavia, Simic’s youth was buffeted by the dangers and disruptions of war, emigration, and poverty. His work shows the lessons he’s absorbed about the workings of fate and chance, his awareness that an elevator is likely to take you to an “icy cellar” before going to the desired upper realms.

What impresses me about his poetry is his close attention to the world, the precision of his details, and the concision of his lines. Each poem feels finished, in a way many poems I read do not. Each word is there for a reason, and sometimes more than one. Most of his poems are fairly short, often presenting a fairly ordinary scene before inviting us to explore it, turning it over in our hands, letting the resonances build. Here’s an example.

The plastic statue of the Virgin
On top of a bedroom dresser
With a blackened mirror
From a bad-dream grooming salon.
Two pebbles from the grave of a rock star,
A small, grinning windup monkey,
A bronze Egyptian coin
And a red movie-ticket stub.

A splotch of sunlight on the framed
Communion photograph of a boy
With the eyes of someone
Who will drown in a lake real soon.

We see a seemingly random collection of items on a dresser, imbued with humor. Yet there is foreshadowing here: the blackened mirror, the bad dream, the grave, the punched ticket. So we are surprised, but not completely, by the sudden turn at the end of the second stanza. Chance can change things in an instant, as we are warned by the pun in the title (altar/alter).

Each word here works so hard. My group talked at some length about the inclusion of the word “communion” in the description of the photograph. It tells us a great deal: not just the approximate age of the boy when he died and what he is wearing, but also the poignancy of leaving life the age of reason, just as he can begin to understand about death. Simic doesn’t need to tell us the photograph commemorates the boy’s first communion. What I find uplifting in the final stanza is the assurance that we will find beauty, even if accidentally, even if it is easily lost.

In many of his poems, Simic uses humor to leaven the gloom, as he does in “The Altar”. Sometimes the humor is ironic, such as a blackened mirror or a salon that delivers bad dreams. He uses puns as well, and changes of tone, such as the shift to a more colloquial “splotch” and “real soon”. Some poems, such as the aptly titled “Avenue of Earthly Delights” with its nod to Bosch, verge on the surreal.

I appreciate his attention to the darkness inherent in something as simple as the berries in “Roadside Stand” that “will stain our lips and tongue / As if we were freezing to death in the snow.” To me, adding the possibility of death to a poem that starts out as “a paradise” and ends with the bored boy “Straightening crumpled bills in a cigar box” creates a necessary shading that rounds the picture.

As I read these poems, I found myself thinking of the online flood of Mary Oliver poems following her recent death. It may seem ludicrous to compare the two but both have an attention to even the smallest things in the world around us; both don’t hesitate to include the darkness and danger in that world; and both to me feel ultimately positive.

If you are looking for a way to acknowledge the dark forces in our lives and address the meaninglessness of existence—and to do so without despair—then these poems are for you.

What is your favorite Charles Simic poem?