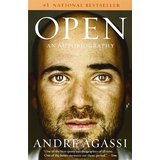 I always start my memoir classes by discussing what a memoir is. It covers a discreet portion of the author’s life, usually with a limited time frame, and is the author’s perception of the incidents described. Autobiography, on the other hand, is expected to be more objective and to cover the author’s entire life. Therefore, we might question this “autobiography” of someone who is only 39 the year it is published.

Yet Agassi is justified in calling this an autobiography. The frame of the book is his last match as a professional tennis player, at the U.S. Open. From there we go back to his childhood and follow him up to that moment in 2006, that last match. Since almost every moment of his life has been devoted to professional tennis, I think it’s fair to say that one life ended that day and another began. Also, the reworking of Agassi’s original material by another writer, the extensive fact-checking and multiple editorial rewrites provide some objectivity to what is a very personal account.

I love watching tennis, the intense one-on-one battles where the advantage shifts back and forth. The psychological battle interests me almost more than the physical one. A person has to stand out there alone under the unrelenting eyes of cameras and spectators, without teammates or coaches or even privacy to collect themselves. They have to summon the courage to keep playing when they are losing horribly, embarrassingly, and the composure to stay calm in the run-up to an unexpected win.

Reading this book just after Wimbledon gave me added insight into what is happening on the tennis court. Agassi speaks of the “magnetic force” that comes near the end of a match that can pull you over “the finish line” into the win and the equal force pushing you away.

More than that, he gives a close description of the shaping of a professional tennis player, something that starts in early childhood. Agassi’s father gave him a racket when he was three but even before that, according to his mother, “when I was still in the crib, my father hung a mobile of tennis balls above my head and encouraged me to slap at them with a ping-pong paddle he’d taped to my hand.” No wonder he grows up hating tennis and rebelling whenever he gets a chance. Given his seemingly adult-style career, I had to keep reminding myself as he described some of his shenanigans of how young he was.

In some ways, it’s an all-too-familiar story of a childhood stunted and deformed by a stage- or sport-parent who demands that the child’s every moment be devoted to practice. Yet Agassi’s unusual openness about his experiences, his emotions, his misjudgments and mistakes lift this book above the ordinary. The tone is well-calculated to avoid self-pity and show respect and even love for those who might be said to have harmed him.

It’s a compelling read. I was surprised by how well-written it is until I got to the acknowledgments at the end. Agassi credits J.R. Moehringer with transforming their taped interviews into this book, along with input from editors and first readers. He explains that though Moehringer refused to have his own name printed on the cover, Agassi wanted to ensure he got credit for his work. With that, I was no longer surprised. Moehringer is an amazing writer. I’ve written about his extraordinary memoir The Tender Bar.

I treasure the brief outline of Agassi’s second life at the end of the book, a life born of his desire to help disadvantaged children. If we are lucky, we find work that gives our lives meaning.

What sports biographies or autobiographies have you found illuminating?