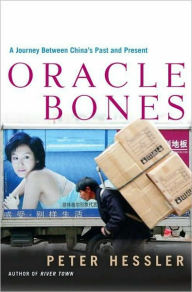 Although several years old now, Hessler’s book offers a good introduction to a country that is rapidly changing. Presented chronologically, the stories of people and places and artifacts span the years from 1999 to 2002, when Hessler worked in China as a teacher and journalist from. As in the best of today’s narrative nonfiction, these stories are vivid vignettes that immerse the reader in the experience.

We meet an 82-year-old, tennis-playing man who “carries himself like a soldier” and stubbornly refuses to leave his family home when the developers demand it. We camp in a tower on the Great Wall during a sandstorm, hang out in cafes at night with Uighur traders, and cruise along the banks of North Korea. We talk with peasants and movie stars, archeologists and black marketeers. We learn what a ghost chariot is.

The book’s subtitle, A Journey Between China’s Past and Present, points to the aspect of the book that—next to the stories—most appealed to me. Hessler gives the reader historical context for everything, but so subtly that we can absorb the information almost without noticing it. The trick is that he gives us a snippet of history at the moment we need it and immediately returns to the story.

Also, every two or three chapters we get a section that zooms in on a particular artifact, such as the Flying Horse, discovered in 1969 in the village of Wuwei. Since archeologists were not available in the middle of the Cultural Revolution, the peasants who blundered onto the third century tomb while digging under a temple did the excavation and kept the many bronzes in their own homes until they were finally collected. The background and symbolism of the horse are teased out in a series of interviews that keep the reader’s attention engaged.

Our attention is held, too, by certain people and stories that are carried through the book, such as former students with whom Hessler stays in touch and the mystery surrounding a suicide. Also, descriptions of places come alive with a handful of details, such as this one of the Ju’er neighborhood of Beijing:

Some residents kept makeshift pigeon coops on their roofs, and they tied whistles to the birds, so that the flock sounded when it passed overhead. In the old parts of Beijing, that low-pitched hum, rising and falling as the birds soared across the sky, was the mark of a beautiful clear day. In late afternoons, the trash man pushed his cart through the hutong, blowing a whistle. The sound faded as he made his way out of the neighborhood; usually he was gone just before sunset. Nights were silent.

What sent me to this book were the lovely quotations credited to it in Hélène, by Deborah Poe, such as the epigraph from Chuang-Tzu about the use and limitation of words. My favorite is this from Chen Mengjia, a poet and scholar: “I crushed my chest and pulled out a string of songs.”

I particularly liked Hessler’s evaluation near the end of the commonalities and differences between China and the U.S. We have more in common than you might think.

Change has only accelerated for China since 2002, but this book is a good place to start if you want to understand modern China amid the fragments of its long past.

What book have you read about modern China?