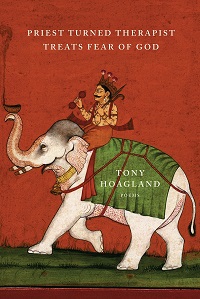 I have long been a fan of Tony Hoagland’s poetry and have written before about his books here and here. He brings together humor and tenderness, wit and emotion, gentle satire and surprising insight. Using the things of this world, he invites us to be present in our lives and appreciate each moment.

I used the present tense. It’s hard even now to admit that he is gone, even after following some of his journey through his poems and essays in The Sun Magazine, such as “The Cure for Racism is Cancer“. “Come into these waiting rooms and clinics, the cold radiology units and the ICU cubicles,” he says.

This strange country of cancer, it turns out, is the true democracy — one more real than the nation that lies outside these walls and more authentic than the lofty statements of politicians; a democracy more incontrovertible than platitudes or aspiration.

Tony Hoagland died on 23 October 2018. We are lucky to have his work to turn to.

Lately I’ve been reading his essays on the craft of poetry. Like his poems they are accessible, even to someone tired out after chasing a toddler all day. I’ve learned so much from these essays, not only for my own craft, but also for appreciating other poets’ work.

In this new volume of poems, there is plenty of Hoagland’s wry humor: “I will tell you this right now: Cincinnati / has not been a great success for me. / My allergic reaction to small talk has ensured / that I don’t get asked to parties anymore.” There is satire and wit, as you can tell from the volume’s title, taken from one of the poems inside.

But most of all there is an unsentimental poignancy in poems such as “Examples” where in giving examples of things like justice and remembering and fortune, he combines irreverent images of Joseph McCarthy and dental hygienists with seemingly unimportant moments, such as a woman removing her sunglasses. Yet in the end, through stunningly apt use of metaphor, he takes us deeply into the joy and privilege of life itself.

He’s been called the poet of the human condition. Even when recounting his own experience, as in “Trying to Keep You Happy”, he invites us to participate in his everyday yet unexpected plans, his “selfish master strategy / to shackle you to me with happiness.”

And the final poem in the volume “Into the Mystery” I cannot even talk about, so overwhelming are these seemingly simple lines. Get the book. Read it. Even if you think you don’t like poetry.