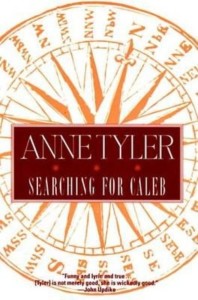 A couple of weeks ago, in discussing The Help, I said that the relationship between domestic help and their employers was more complicated than Stockton's book indicated. For a more nuanced view, I went back to this Anne Tyler novel from 1975. While the relationship between the Pecks and their long-time maid Sulie is a very small part of the story, it is a crucial one and Tyler nails it. In just a couple of scenes she captures the conflicting emotions that drive their behavior towards each other. It is a privilege to read this woman's writing.

As the story opens, Justine and her grandfather, Daniel, are on a train to New York, tracking down another lead on the whereabouts of Daniel's brother, Caleb, who walked out of the house one day in 1912 and never returned. It's human nature to want to be part of a group, whether a gang, a neighborhood, a country. For the Pecks, it's the family that defines them. They circle the wagons and don't allow anyone in. Even spouses are eventually squeezed out. And the family ties are so strong that almost no one leaves. Only Caleb. And this generation Duncan, Justine's restless cousin and husband, with her floating in his wake as he moves from town to town.

Now Daniel—who never planned to live anywhere but Roland Park, in the large house right next to his father's house, where his spinster sisters now live—has come to stay with Justine and Duncan while he and Justine search for Caleb.

Justine was always a good girl, obedient and agreeable, conforming to the expectations of the people around her, whether by wearing the hat and gloves that her aunts deem necessary for venturing out of the house, or moving from town to town when Duncan decides to up stakes and try someplace new. Marrying Duncan turns out to be one of her only two reckless moments—the other is learning to tell fortunes—but, as her baffled aunts agree, at least Duncan is a Peck. Like Caleb, Duncan would probably never have bothered to contact the family again once he left, but he has Justine to do that, and he loves her enough to go along to the rare family occasions . . . with only a little complaining.

Tyler is known for her eccentric characters, but having lived in Roland Park, I have to say that these are all people I recognise. And, knowing them, I am grateful for Tyler's gentle and compassionate hand in assembling their portraits. The older Pecks, secure in their superiority to the rest of the world, are more thoughtless than arrogant. They live in the bubble of the past, carrying on traditions from a previous century, shaking their heads at the way the world seems to be changing.

Roland Park resisted change for a long time. Even in the 1970s when this book was written, there were many families like the Pecks. I too suffered having a hat and little white gloves forced on me. People stayed where they grew up. I remember riding the back roads of Roland Park, maybe fifteen years ago, with my mother and sister as they recited for each house who lived there, what school they went to, who their parents were, what school the parents went to—and in Roland Park that means what prep school. But it is beginning to change. For some people change feels more like loss, so like the Pecks they try to preserve the world that they know. There are many ways to deal with loss, whether it comes in slow increments or with the quiet, almost unnoticed shutting of a door.