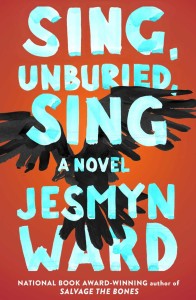 Ward’s widely praised second novel takes the reader into the lives of a black family in Mississippi. It starts with Jojo’s grandfather inviting the boy to help kill a goat as part of celebrating Jojo’s thirteenth birthday. The horror of seeing the slaughter—vividly described—makes the boy throw up.

Jojo and his baby sister Kayla are being raised by their grandparents—though their grandmother is bedridden with cancer at this time—because their father Michael is in prison for drugs and their mother Leonie is not interested in caring for them. Between work, hanging out with her white friend (a co-worker named Misty) and her own drug use, Leonie has many reasons to be absent physically and emotionally. Moreover, as we learn later, she is still passionately in love with Michael to the exclusion of all else.

Leonie, who alternates narrating chapters with Jojo, gets a call that Michael is being released and decides to pick him up from Parchman, taking the children and Misty, whose black boyfriend is also imprisoned there. The road trip is a series of escalating disasters, with Jojo trying desperately to care for Kayla while Leonie and Misty ignore her or complain about her.

Jojo thinks about his grandfather’s often-told story of his own time at Parchman where he tried to care for a twelve-year-old boy, Richie, who had been sent there for stealing food for his nine siblings. When they arrive at Parchman, Jojo can actually see and talk with Richie’s unquiet ghost; Jojo’s blood family all have certain powers or ties to the spirit world. Richie returns in the car with them because he is desperate to confront Jojo’s grandfather. Several short chapters are narrated by Richie.

I found this fierce and troubling novel almost too vividly written. Even second-hand, the travails of this family are hard to bear. There is value in enduring them, of course, in bearing witness, no matter how much we think we already know about the effects of systemic racism on families.

Some of my friends have complained that the author packed in all the expected tropes: racial slurs, carceral injustice, drugs, children being raised by grandparents, even driving while black. Yet to me, the concatenation of problems is only too realistic. Any young person, even one from a stable family like the one Leonie grew up in, can make a wrong decision and—without the kind of wealth or family connections that enable more privileged young people to escape the consequences of their actions—start down this only too familiar trajectory. All of which is exacerbated by racism of course.

Some of the parallels seemed a little too obvious, such as the goat’s insides being pulled out and Jojo emptying his—there’s a lot of vomiting in this book—and Leonie and Misty’s reversed interracial relationships. Also, part of the ending was—for me, at least—a bit of a letdown.

Another quibble is that sometimes the characters’ voices don’t ring true. However, the multiple points of view are handled very well, which is difficult to do.

I loved the strong tie between Jojo and Kayla. Even more powerful to me was the relationship between Richie and Jojo’s grandfather. These are beautifully drawn. There’s a lot of love here, as well as pain.

Have you read a story that made you think about hidden sources of resilience?