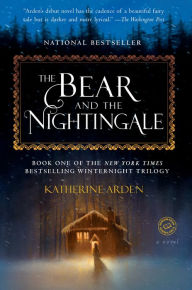 The story opens on a March evening, which in northern Rus’ (an earlier portion of what eventually became Russia) means winter has not loosened its grip. The three children of Pyotr Vladimirovich, the local landowner, beg their nurse Dunya for a story. Prompted by their mother, Dunya tells the story of Morozko, the Frost King, who was much feared by the people.

The stepmother of a peasant’s beautiful daughter decides to rid herself of the child by marrying her off to Morozko. Left alone deep in the forest, the girl does indeed meet Morozko who tests her courage with his power over the cold winds.

This is a marvelous way to start the story of Vasya, a fourth child born soon after this scene. Dunya’s story lets us know that this story is going to e a tale, one that draws on myths and legends of Rus’. It also sets up the story to follow.

Even as a child, Vasya—an independent scamp if ever there was one—demonstrates a power that no one else has: she can actually see the chyerti, the spirits that protect the household and horses, that live in the woods and ponds. Others believe in them and leave offerings for them, but only Vasya sees them and talks with them.

When Pyotr brings back a new wife—the children’s mother had died at Vasya’s birth—things begin to change. Anna forbids any recognition of these spirits and brings a beautiful and arrogant priest to their household to preach against this heresy, not just to the family but also to the village.

As crops fail and winter’s cold grows harsher, it becomes apparent that an ancient evil has awakened. Vasya is caught up in its rivalry with his opposite, though he appears to be as ruthless as the evil one and his goodness questionable. Vasya must draw on all of her gifts if she is to protect her family and her village.

It’s an exciting story, graced with vivid characters and stunning descriptions. I particularly liked the way real myths and legends are woven into Vasya’s story, and the sometimes astonishingly original depictions of mystical happenings.

The only thing I missed was Vasya’s internal life. True we get her thoughts and fears, but all her battles are with external forces; she never has to wrestle with herself. She is the same person at the end of the story as she is at the beginning. Though her circumstances have changed, she herself has not. Perhaps this is simply a given of the fairy tale genre, even one aimed at adults.

I had a couple of other minor quibbles—the title did not reflect the story, and some of the minor characters who loom large in early chapters then disappear—but overall I thought it a remarkable achievement, especially for a first novel. I look forward to reading the rest of the trilogy.

Have you read a fantasy novel that incorporated myths and legends in an unusual way?