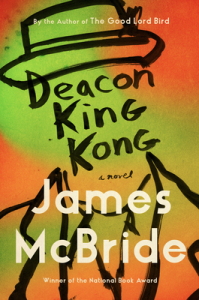 The story opens with Sportcoat, a deacon at Five Ends Baptist Church who is perpetually drunk on the local moonshine called King Kong, entering a courtyard at the Cause Houses, a Brooklyn housing project. He takes out a rusty handgun and shoots Deems, a young drug dealer whom Sportcoat used to coach on the project’s baseball team.

Deems gets away with just losing an ear, but all the witnesses are shocked by the genial drunk’s use of violence. They are also concerned about the danger to Sportcoat from the police, Deems himself, or competing gangsters. It is 1969, just before communities such as this—a mix of Baptists, Catholics and criminals; Blacks, Latinx, Irish, and Italian—began to disintegrate due to the loss of idealism after Martin Luther King’s assassination, the changes in city politics, and the influx of crack cocaine.

McBride uses what Jane Alison in Meander, Spiral, Explode calls a spiral structure, which “begins at a point and moves onward . . . spinning around and around that central point or a single axis.”

As we spiral out from the shooting, we get to know many of the people in the community: Sportcoat’s best friend Hot Sausage who gives out the high-quality cheese that appears regularly as if by magic, an Italian gangster known as the Elephant, and Deems himself, once a promising pitcher but lured away by the easy drug money. We meet Potts, a policeman near retirement who’s come back to his early beat in the Cause Houses, a number of strong church ladies, and a quiet Nation of Islam convert named Soup, among many others. It’s a large cast, but everyone is so colorful that it’s easy to remember them.

With humor and compassion, McBride gives us their stories, while always coming back to Sportcoat and the shooting. The deacon claims he doesn’t remember shooting Deems and instead is trying to get him to come back and play baseball. Sportcoat is also in near-constant conversation with his dead wife Hettie, who disapproves of his laziness and drinking, and refuses to reveal where she hid the money collected for the church’s Christmas Fund.

The Christmas Fund is one of a number of other spirals in the story, cropping up repeatedly, as does the question of who is providing the cheese. There’s also a recurring question expressed by various characters as to what exactly a deacon does, and stories about the founding of the church.

A lot of humor is created by the shenanigans the characters get up to, such as Sausage and Sportcoat sharing a single driver’s license on alternating weeks or trying to fix a recalcitrant generator. Even when poking fun at them, McBride sidesteps stereotypes to present each character as a full human being, flawed perhaps, but trying their best to get on.

While some reviewers have considered this story a farce, to me it seemed utterly real. The characters are much like people I have known, and their world—so vividly portrayed—one I am familiar with.

Between the humor and the human drama, the story moves quickly. A common problem for spiral stories is how to end them and, indeed, here the ending seems a rush to tie up the different subplots. Disappointingly, there are some loose ends left dangling and bit of time confusion, but these are small quibbles for a book that manages to be both rollicking fun and profoundly moving.

Most of all, I treasure stories such as this one where the characters, despite their failings, are treated with respect and compassion. We all want that for ourselves. And what a better world this would be if we could all manage to extend the same to everyone we meet.

It’s rare to find a bestseller that lives up to its hype. This one does. Have you read it? What did you think of it? 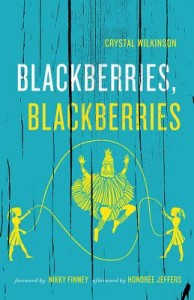 Wilkinson’s first book is a collection of short stories—perfect for my attention span just now! These stories feature Black women in rural Kentucky, young and old, each with her individual take on the world, her own idea of herself.

In some stories, such as “Tipping the Scales”, we meet women who can’t be bothered by society’s conventions. A big woman, “not sloppy fat, though,” Josephina Childs has “sure had her hands full in the men department most all her life.” All her life she’s been aware of how “the whole town ‘bout tripped over” themselves to find out what was going on with her mother in the house Ethel’s lover build for them. So when Josephina wants children, she goes ahead and has them. I could hardly wait to find out what happens as she charts her own path among the gossiping townsfolk.

A few stories are from a man’s point of view, such as “Mine” in which Joe Scruggs complains about his former girlfriend Racine. She’d left him when she found out he was cheating on her. Now he sees that she has cut the long, straightened hair he’d loved in favor of short natural hair. Worse than that, she’s had breast reduction surgery and “black women do not get their breasts worked on.” The voice is pitch perfect as Joe thinks about what he sees as Racine’s insult to him and about Darlene, the woman he cheated with, now his wife. It’s a strong indictment of a man’s idea of ownership.

Wilkinson’s use of voice carries each of these stories. Without resorting to dialect, she captures the individual rhythms of her characters’ thoughts and speech. In “Mules” she finds just the right voice for a naïve girl, just starting to develop and learning to navigate the complicated and risky world of men. In “Deviled Eggs” Wilkinson gives voice to a young girl who is dragged along when her mother goes to her job as a domestic servant and has a startling lesson in racism from the elderly white woman who thinks she is doing the child a favor. In “Need” we meet three characters in a café, two women embarking on a difficult conversation and their male waiter, each with a distinctive voice.

I’ve been thinking recently about the shape of short stories, how they begin, how they end. The variety of story shapes is this collection is part of what makes it so enticing. Some stories spiral back to their beginning, while others rise to a new understanding. Many for me ended in ways that surprised me, taking a direction I hadn’t expected: Wilkinson displaying the penchant for independence we see in many of her characters. I love being surprised!

In every story, Wilkinson demonstrates the writer’s mantra that the personal is universal. These may be Black women in Appalachia, but I saw myself in each of them. Reading their stories has been a gift, and I look forward to reading more of her work.

Do you like reading short stories? Can you recommend a collection?

Another mystery, this time set in Chicago in December of 1968. It’s the end of a tumultuous year that saw the assassinations of Martin Luther King, Jr. and Robert Kennedy, the Summer of Love, and in Chicago itself the violence around the Democratic National Convention.

Seeking independence, Cassandra has left the home of her well-off grandaunt and granduncle to live in a multiracial commune in a questionable part of town. She’s in her early 20s, cutting college classes to read books on politics and social justice. When she met Wilt, a charismatic Black man, she found a friend who was on the same wavelength, and was delighted when he encouraged her to join the commune where he and his white partner Mia lived along with several others.

She delights in her new freedom and friends, happy to have found a family she has chosen rather than the over-protective relatives who took her in after her parents’ death. There are tensions, not only family issues but also marijuana use perhaps affecting her schoolwork, sexual freedom coming up against learned ideas about relationships, decisions about who else to admit into the commune.

Then they discover the brutally murdered bodies of two of their members. As Cassandra tries to untangle why they were killed, she is confronted by how little she knows about her new friends, while navigating the questionable tactics of the police and resisting her family’s attempts to make her come home.

The secrets and hidden agendas that make mysteries so fascinating are well-constructed here. The story kept me guessing, surprising me at times. I also found Cassandra a realistic and intriguing woman, simultaneously familiar and different, someone I enjoyed spending time with. All the characters come alive, not just their flaws and fine points, but also the different worlds they straddle.

Carter succeeds in capturing this period, which I remember only too clearly. Seeing it again through the eyes of a young Black woman, with all the additional hurdles and advantages, fascinated me. For example, much as most of us hippies distrusted the police, a person of color has more factors when deciding whether to call them when a crime is committed.

And thinking of the differences and similarities of the country during that election and the current one has given me a slightly different perspective on today. Change is hard, and the Age of Aquarius which once seemed within reach is something we are still seeking.

Anyone who is interested in a glimpse of what the 1960s were like, looking beyond the memes and stereotypes, will enjoy this book, as will mystery readers. I’ll be looking for more books in Carter’s Cook County mystery series.

What do you look for in a mystery series?