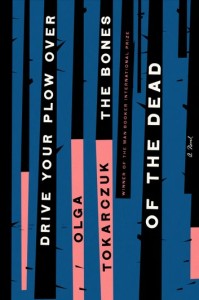 An unusual and fascinating novel, Tokarczuk’s book explores the border between poetry and prose, story and fairy tale. The quirky voice of the narrator is firmly established with the first sentence and sustained throughout the book.

Living alone in an isolated community in western Poland, Janina is an older woman who manages her vocation of astrology, the translations of William Blake’s poetry that she and a friend are doing, and the griefs that accumulate over the years. Despite her various physical ailments, she looks after the other homes during the winter, making sure the martens don’t get in and the pipes don’t freeze. Only two other people live there during the winter, Oddball and Big Foot. These are her names for them, as she names almost all the characters.

Then Big Foot turns up dead under mysterious circumstances. He was a loathsome creature in her eyes, a poacher who didn’t care how cruelly he hurt the animals he snared, someone who showed no respect for the non-animal natural world either, cutting down trees for no reason. Yet his death moves her. Oddball insists that the two of them wash and dress the body before the police come. She says:

There we stood in the cold, damp room, in the frosty vacuum prevailing at this dull, gray time of night, and it crossed my mind that the thing that leaves the body sucks a piece of the world after it, and no matter how good or bad it was, how guilty or blameless, it leaves behind a great big void.

Such a powerful way to describe a death. Their call to the police is delayed because not only is the signal spotty, but they often get a signal from the other side of the nearby Czech border instead of their own signal.

Borders are a recurring image, not just between countries, but between a remote community and town, fields and forests, humans and animals, grief and love, one person’s truth and another’s, language and reality. In fields near her house the hunters from town have erected huts they call “pulpits” where they hide in order to shoot the animals that come near, lured by the food the hunters have spread. I’m jarred by the idea of doing murder, preaching murder from a pulpit. Yet it’s so true.

More deaths follow, stranger and stranger. But there are greater mysteries here. What life is worth more than another? What actions are justified by law or ethics, and which one dominates the other? Are we as helpless as we think we are? How do our homes, so meticulously described in this book, reflect us and nurture us and protect us—or not? What is our relationship with the wild, meaning the portion of the natural world that we do not manage?

The title is from Blake, as are epigraphs for each chapter, adding to the fantastical atmosphere. The story sometimes feels like a fable, sometimes a prose poem, sometimes a wrenching view of age and isolation, sometimes a paean to friendship. For Janina does have friends: Oddball, her neighbor; Dizzy, her compatriot in translating Blake; Good News, who runs a second-hand store in town; Boros, an entomologist she meets in the woods.

I found this book so rich, so thought-provoking that I not only listened to the audio book, repeating many chapters two or three times, but also bought the paperback book and am reading it. I loved the narrator’s performance in the audio book, but with the physical book I am seeing different things, appreciating different things—mostly to do with language. Thus, I’m continuing the story’s exploration of borders between one sense and another, between the physical and the metaphysical.

Have you read a novel so fascinating that you immediately reread it?