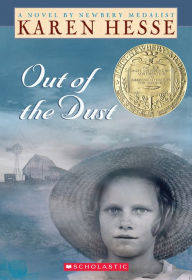 Another Middle Grade coming-of-age story told in verse—pure coincidence that this was next up on my TBR (to be read) pile when I stopped to read Brown Girl Dreaming. Hesse’s story is also a Newbery winner but is fiction rather than memoir. Thirteen-year-old Billie Jo loves playing the piano when she isn’t busy helping her father and pregnant mother try to keep body and soul together in Dust Bowl Oklahoma.

She is good enough to be asked to play in shows, often with handsome Mad Dog. If she gets well enough known with her music, she can leave the failing farm and the ubiquitous dust behind and go to California. Then a terrible accident throws all her plans into disarray.

Spanning a two-year period from January 1934 to December 1935, these poems paint a vivid picture of what life was like during that terrible time. She describes having to turn the glasses and plates upside down on the table until the last second before serving the meal, and still the food is saturated with dust. There is the heartbreak of a field of wheat, already decimated by drought and wind, be flattened by hail or devoured by grasshoppers.

In some aspects, Billie Jo’s life is similar to many teens: wanting more independence than her mother is willing to give her, feeling as though she’s stuck in the middle of nowhere. When her teacher is in a production of Madame Butterfly, and Mad Dog says that “most everyone’s” heard of that opera, Billie Jo is miffed.

How does that
singing plowboy know something I don’t?
And how much more is out there
most everyone else has heard of
except me?

And she has a best friend. But when Livie leaves for California with her family, Billie Jo says, “I couldn’t get the muscles in my throat relaxed enough / to tell her how much I’d miss her.”

Poetry works well as a form for this novel. The fractured narrative adds to the feeling that you are reading a diary. Also, the necessary compression distills each scene into its essence while retaining the emotional impact. Hesse makes effective use of symbols as well, such as the mother’s special cranberry sauce for Thanksgiving. Here is one complete poem, called “Broken Promise”:

It rained
a little
everywhere
but here.

Other poems are longer and tell a more complete narrative, such as “Blankets of Black” about going to Texhoma for Grandma Lucas’s funeral. Billie Jo’s detailed description of the ordeal is riveting.

While written for ages 11-14, Billie Jo’s story will certainly appeal to adults as well. For younger readers, it’s a good introduction to the terrible tragedy of the Oklahoma Dust Bowl during the Depression.

Have you read a Young Adult or Middle Grade novel that brought an historical period to life for you? 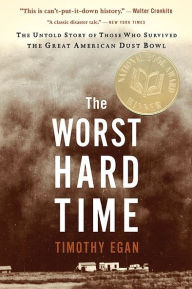 I’ve written about this book before. Rereading it nine years later for my book club, I was struck by the same things I mentioned then: the factors that led to the destruction of a huge ecosystem that had developed over thousands of years. It took only a couple of years for it be ruined, for the dirt to be lifted up into great clouds that blew as far east as New York and Washington and killed people and animals who tried to stay on in what became known as the dust bowl.

My book club discussed who was at fault. Although there were some “suitcase farmers” who tore up the sod for a quick harvest and then disappeared, leaving the ground without even a cover crop, most of the farmers just wanted what anyone might want: a place to work and raise your family.

We talked about how hard it is to weigh future damage against current needs. One person mentioned talking with a friend in Nebraska who works for a farm—a huge agribusiness, as most farms are today—who said farmers today make the same choice: if prices go down, they plant more to make up for it, even knowing that increasing the supply will drive prices down even further.

We talked about the complicity of the government, encouraging people to believe that “dry farming” could work and offering incentives to get people to move to areas previously designated as desert. We also talked about greedy capitalists, like the syndicate that owned XIT ranch who didn’t care if families starved and died as long as the syndicate could pay their shareholders.

So much here resonates with what is happening in the U.S. today. As regulations and rules have been decimated by successive “pro-business” administrations, banks and businesses have gone wild, not caring who gets hurt. Their reckless actions led to the depression of 2008 and to the enormous loss of jobs—real jobs, that is, with benefits and regular hours.

As one of the book club members pointed out, another parallel is the way hard economic times bring out blatant racism, blaming black people for taking jobs that should go to white men. Egan describes the harsh rules against people of color, including the case of two black men jailed for months simply for spending a night in a town where that was not allowed and forced by the judge to dance at their hearing. He quotes speeches by politicians such as “Alfalfa Bill” Murray railing against blacks, Indians and Jews. Sound familiar?

Another parallel was the difference between Hoover’s response to the Depression and Franklin Roosevelt’s.

Hoover believed the cure for the Depression was to prime the pump at the producer end, helping factories and business owners get up and running again. Goods would roll off the lines, prosperity would follow. Roosevelt said it made no sense to gin up the machines of production if people could not afford to buy what came out the factory door.

Trickle-down, anyone? What none of us could understand is why these lessons from the past don’t keep us from making the same mistakes over and over. Is it ignorance of what happened not that long ago? Or something darker, that as long as someone has a chance at getting a bit of money or power, he will take it, regardless of who else suffers? Yet many people pulled together in these communities to help each other out.

One thing that is different today is that during the dust bowl years, people who received government assistance—“4,000 of the 5,500 families in six counties of the Oklahoma Panhandle were getting some form of relief” from the government—recognised where help was coming from. They praised Roosevelt and his New Deal programs, “nearly a hundred thousand people in a city with less than half that population” turned out for Roosevelt’s visit to Amarillo. Instead of railing against big government, they understood that the government was keeping them alive.

As a writer, I was struck on this second reading by Egan’s extensive research and by his deft weaving of information with the personal stories of a handful of people. The combination enables us to see the big picture of what was happening in the Great Plains, from Nebraska to Texas, as well as the impact on individual people.

Have you read a nonfiction book where personal stories have helped bring the narratives to life?