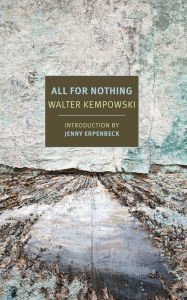 To this last novel, published a year before his death in 2007, Kempowski brings all the experiences of his long life. Born in 1929 in Hamburg, he was caught up in WWII, at 15 witnessing the East Prussian refugees in Rostock, the coastal town where he grew up. Soon after, he learned that his father had been killed.

He escaped to the west at the end of the war, but on a 1948 visit back to Rostock, now occupied by the Russians, he and his mother and brother were arrested for espionage and sent to a Soviet prison. Released, he was deported to West Germany and became one of that country’s most famous authors.

Drawing on these experiences, Kempowski crafts a story of an East Prussian family continuing to live their normal, even banal, lives while the first Baltic refugees fleeing the approaching Russians begin to pass their estate. Eberhard van Globig is serving in Italy, leaving his beautiful, if vague, wife Katharina to drift around their manor house or visit her pregnant friend in the nearby town while his elderly aunt actually runs the household and his twelve-year-old son Peter is tutored by a schoolmaster too old to fight who comes out from the town every day.

They welcome refugees that come to the door, sharing their food with them and enjoying the songs or stories the travelers bring. It breaks up the monotony of their lives. However, we learn later that each refugee has filched something from the van Globigs before leaving. Then the self-important head trustee of the local Labor Front, who lives in the new settlement across the road and considers himself their pseudo-mayor, decides to start billeting more refugees in the manor.

Underneath the details of the days, calm, somewhat repetitive, sprinkled with quotes from poems and folksongs, there are questions being asked over and over. Should we leave now? How close are the Russians? Will our forces turn them back? If we leave, where should we go? Should we turn back or go forward?

The family exists in a pre-war bubble of serenity, Peter playing with his train set, adding to his treehouse, looking at things with his new microscope, even as the train of Baltic refugees swells and the sound of guns grows louder. The scenes grow more and more surreal.

What makes this story so remarkable is its unsentimental, objective tone. The author never even hints at what we should think about these people and their actions, letting us draw our own conclusions. The characters are given to us whole, with all their kindnesses and cruelty. Each is formed by the live they’ve lived; none are totally good or totally bad.

But always we have the title. Each of the characters—refugees, family, other locals—is obsessed with what to take when they go and mourns what they have left behind. Auntie insists on thoroughly cleaning the manor before they embark.

What do we leave behind? What use is all our learning, the poems we’ve memorised, the love we’ve given or deaths we’ve mourned? What sense can we make of life when fate so randomly bestows both favors and misfortunes? In wartime, we are constantly reminded of the capriciousness of fate. One family on a road packed with refugees is killed by a bomb while others are not. One son is killed in battle and another is not.

This quiet but intense book makes us consider all these ‘last questions’. It carries the weight of our not-so-long-ago history, which is always happening all over again. What could be more timely than a novel about refugees? It also has much to tell us about human nature. And then there’s the title.

What novel have you read that seems to carry an entire life’s worth of experience?