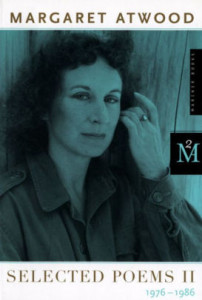 I came to Atwood through her fiction, but it is her poetry that has come to mean the most to me. For me, her poems from this period expressed my own complicated mix of sorrow, pity, praise, and controlled rage.

As in her fiction, Atwood sometimes uses a female protagonist to shed new light on social issues. Most poems about the myth of Orpheus focus on his divine music and tragedy of his trip to the underworld to bring his wife Eurydice back to the realm of the living. However, Atwood’s “Orpheus (1)” gives us the voice of Eurydice who says, “the return/to time was not my choice.” She speaks of his “old leash . . . love you might call it” and says:

Before your eyes you held steady
the image of what you wanted
me to become: living again.
It was this hope of yours that kept me following.

In these few lines, Atwood captures the frustration of women wanting to be seen for themselves, not something to be molded to their husband’s fantasy, along with the patient kindness, the desire to spare him hurt that keeps us silent.

Myths and fairy tales are subtexts in many of these poems. In “Variation On The Word Sleep”, she alludes to several fairy tales, including one of my favorites: The Twelve Dancing Princesses.

Atwood’s Canadian identity has informed much of her critical work, including her landmark book Survival: A Thematic Guide to Canadian Literature. Published in 1972, it makes a case that Canadian literature reflects a unique national identity, one derived from the harsh conditions in the frozen north and the clear-eyed accounts by early pioneers trying to survive in the wilderness. This somber theme works its way through many of the poems in this collection, sometimes emerging in strong, unpretty images. In “Flying Inside Your Own Body”, for example, she describes

Waking, your heart is a shaken fist,
a fine dust clogs the air you breathe in;
the sun’s a hot copper weight pressing straight
down on the thick pink rind of your skull.

That sense of the landscape as something hostile is tempered by her ecological awareness and sometimes difficult love for the things of this world. In “Marsh, Hawk” she describes a swamp and “a mass grave” of detritus—rotten trees, old tires, bottles and cans—that “spreads on the / land like a bruise.” But the poem takes a left turn in the middle, as so many of Atwood’s poems do, as the speaker wants the marsh rushes / to bend aside, the water / to accept us”, to become one with the complicated beauty of the physical world.

In much of her writing, Atwood draws inspiration from historical figures, particularly Canadian ones, such as Susanna Moody. Some of the poems in this collection seem to draw on this awareness. Sometimes she seems to be speaking for those who came before us.

In Negotiating with the Dead, a collection of her Empson lectures, she says, “Not just some, but all writing of the narrative kind, and perhaps all writing, is motivated, deep down, by a fear of and fascination with mortality – by a desire to make the risky trip to the Underworld, and to bring something or someone back from the dead.”

What themes or preoccupations do you see in one of your favorite writers?