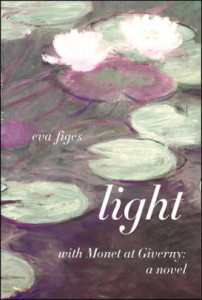 Like Waking, this second novel is slim and beautifully written. In it, we follow Claude Monet and members of his household through a single day, moving seamlessly from one to another. Each has their own concerns, their own fears and griefs.

There’s his wife Alice, haunted by the death a year ago of her daughter Suzanne. Suzanne’s two young children live there as well, cared for by their aunt Marthe. The children are accorded equal space and value in this account with the adults. There are servants: a nervous new cook, an older man who rows Claude out to paint, others. There are Claude’s other children, by his first wife Camille and Alice: Marthe, Germaine, Jean-Pierre, and Michel; and friends of his who drop by in the afternoon.

An even more important character is the garden itself, the one in Giverny that Claude has created—or had created—with an eye to light and shade and how they would change throughout the day.

His eyes took in, for perhaps the thousandth time, the contours of the space he had shaped. Yes, he thought, he had got it about right, the curve of the pond running inward towards the bridge with its reflected arc, two curved spans meeting, the dark mass of bamboo for emphasis, giving it just enough density, pinning it down so that it would not float into the sky along with the fragile column of trees beyond.

I know that the water lily paintings have been too much with us, like Van Gogh’s Sunflowers or Vivaldi’s Four Seasons. I’ve sometimes felt that such things need to be put away for a while so they can recover their freshness. But for me, I confess, the water lilies have never lost their allure.

I remember first seeing the water lilies in, I think, 1969 when they were on display in their own room in the New York Museum of Modern Art, if I remember correctly. My friends and I sat entranced for ages, encircled by these massive paintings. I wasn’t sure what to think about them, despite my courses in art history, only knowing that there was something deeply mysterious about them, something disconcerting and comforting at the same time.

Years later, I began reading compulsively about World War I. I found references to it turning up unexpectedly. For example, J.R.R. Tolkien served in that war, including the 1916 Battle of the Somme. That experience of the flooded trenches where the unburied dead sometimes surfaced in the mud, surely led to his image of the Dead Marshes in the Lord of the Rings, where Frodo gazes into the water and sees the dead looking back at him.

Monet began painting the water lilies and the weeping willows in 1914 as a response to the war, whose guns sometimes sounded no more than 50 kilometers away. They are also a tribute to the fallen French soldiers. Gazing into the water, seeing at once its surface and its depths, as well as the reflections of willow fronds and sky, the paintings disorient me even as they absorb me. I sometimes see ghosts beyond the lilies and reflections, ghosts of the dead, yes, but more often of the peaceful summer afternoons before everything changed.

How would the space around you appear if you had Monet’s eye for light?