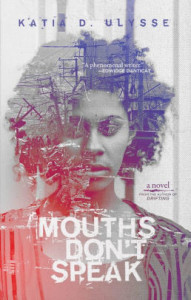 A member of my book club heard Ulysse speak and was fascinated by her descriptions of Haiti and the experience of living in a new country, far from family. My friend recommended this book—Ulysse’s first novel; her previous book Drifting is a collection of short stories—to our group, and we happily agreed. We’d previously read novels set in Haiti by Edwidge Danticat and Madison Smartt Bell, and were eager to read another, especially a book by someone from Haiti.

The story opens days after the devastating Haitian earthquake that occurred on Tuesday, 21 January 2010. Now living in Baltimore with her husband and three-year-old daughter, Jacqueline is desperate to contact her parents who still live in Haiti. “She had not changed her clothes since she learned about the earthquake three days prior. She had not eaten, and she had forgotten to sleep or bathe.” All this time she has been watching the repetitive tv coverage and compulsively dialing and redialing her parents’ phone number. She hasn’t bothered to go to work (she teaches at a public school).

I found this unrealistic. Yes, I remember after the World Trade Center attacks how we couldn’t stop watching the coverage, even though there was nothing new. Some of us tried to contact family or friends. I also sat out the first days of the tsunami and Fukishima disaster with a woman from Japan. So I’m not unfamiliar with the reaction to a catastrophe. Still, Jacqueline’s stupor seemed extreme to me, especially when there’s a three-year-old in the home.

Jacqueline continues in this vein for a month before finally going outside–not bathing though; she just “put her coat on top of the clothes she’d worn for days.” And the school holds her job for her, not pressuring her to return as month follows month. Really? I taught in the Baltimore Public Schools for a few years and can’t imagine such leeway granted to a teacher. A month later, when she is almost ready to give them up for dead, her mother Annette suddenly contacts her; she and Paul, Jacqueline’s father, have been in Florida all this time, not bothering to let their daughter know that they are alive.

While some aspects of the story are hard to believe, the essential story question is not just timely, but important. How can Jacqueline forge a relationship with the parents who, fixated on their own pleasures, essentially abandoned her? Forced to practice the despised piano until her fingers bled in order to impress her parents’ friends at parties and then sent to boarding school in the U.S. when only ten, Jacqueline has had almost no contact with her parents in the intervening years. Suddenly her mother will not leave her alone, needing Jacqueline’s help now that Paul has been permanently disabled because of the earthquake.

A good story question, yet the story itself seems insubstantial. It’s narrated quickly, skipping over much that could have been explored, leaving it feeling superficial. Characters make abrupt changes for no reason. There are a number of subplots alluded to but not really explored: Jacqueline’s husband has PTSD; she’s stopped attending church after—for some never-explained reason—throwing a hymnal at the new pastor; Jacqueline instantaneously becomes BFFs with a white woman who teaches Haitian dialect. Disturbing and sometimes tragic incidents are inserted, apparently to goose up the plot rather than growing organically out of the characters and their interaction.

The underdeveloped characters are a large part of the problem. Instead of multi-faceted individuals, the characters are two-dimensional, each sounding their one note over and over. One member of my book club observed that they are all broken people, thrust together. And broken people do obsess over and over about their point of fracture, bending your ear with the same story over and over. No matter how accurate psychologically, though, it does not make for interesting reading or a convincing plot.

I so wanted this story to be good. How many children today are suffering the effects of growing up with distant, distracted, or self-absorbed parents? The bones of a great story are here. Some of the descriptions are vivid, though there’s actually very little about Haiti itself. Jacqueline’s parents are super-rich, Annette in particular loathing the worthless poor. I did appreciate that Ulysse stepped outside the stereotypes to write about the rich in Haiti and how the earthquake might have affected them, yet I had hoped for more about Haiti and its people.

Writing a novel is hard. It’s different from writing short stories. I wish the author had taken more time with this book, so she could have made it the great novel it promises to be. Dave King wrote an excellent blog post on WriterUnboxed.com about “The Practice Novel”. He says:

The problem is that novels are huge. They involve moving parts you may not even be aware of and require skills with language and tension building and insight into characters that take years to develop. You don’t just have to master these skills, you also have to develop a feel for how they all work together.

So my sympathies are with Ulysse. She’s got the emotions and the plot structure. She’s got good descriptions, strong and varied sentences, and a genuine understanding of human nature. More work with developing characters would go a long way, as would less narration and more dramatic scenes; as readers, we prefer to learn about characters from what they do rather than from what they say about themselves. Maybe this novel feels a bit rushed because she was pressured to publish it quickly. I’d like to read her short stories now, and will look to see what happens with her next novel.

What novel have you read about the immigrant experience? What did you think of it?