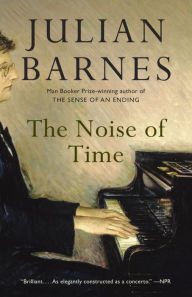 In this new (2016) book from Julian Barnes, we enter the world of composer Dmitri Shostakovich. After a brief prologue, we find ourselves next to the lift in his apartment building, a small suitcase at his feet. He debates bringing a chair from the apartment, but he’s too nervous to sit and anyway, “it would look decidedly eccentric, sitting down to wait for the lift.”

The year is 1936 and Shostakovich in undergoing the first of three “conversations with power” that will alter the course of his career, his life, and his self-respect. When we learn why he is waiting by the lift, we understand that the stakes couldn’t be higher.

Life for an artist under Stalin is a series of compromises. One could choose the heroic gesture, but probably only get one chance since it inevitably would lead to imprisonment and/or death. In a series of exquisitely calibrated musings, Shostakovich ponders cowardice and compromise, and his interactions with the powerful. We follow rabbit trails into his past and present, but always his thoughts center around his music. I want to go back and look more closely at how Barnes has constructed this story so effectively.

Shostakovich is trying to navigate a narrow path that will enable him to continue composing what he wants without getting himself and his family killed. This is not an easy task since those in power define not only what is good art but also the actual purpose of art.

The book is structured in three parts, corresponding to his three encounters with the head of the Soviet state, each twelve years apart. I was particularly struck by the inside view of what life is like under a tyrant. Sadly, this seems to be a preview of things to come in the U.S. and what is already happening in countries like Hungary.

I relished the inside view of this man who is quite ordinary and quite remarkable at the same time. I am endlessly fascinated by what it means to live a good life, what choices and compromises we are faced with and how we negotiate them. Shostakovich criticises others, second-guesses himself, wonders what music he might have written if he hadn’t been constrained by the Soviet state. He counts over his awards half-heartedly, turning his thoughts more often to his defenses and failures.

All his life he had relied on irony. He imagined that the trait had been born in the usual place: in the gap between how we imagine, or suppose, or hope life will turn out, and the way it actually does.

In addition to considering the difficulty of leading a good life, Shostakovich also imagines what it is like to be one of the sycophants sucking up to Stalin or the tyrant himself. He declares that Shakespeare’s plays are no longer relevant: “for all that he was unparalleled in depicting tyrants knee-deep in blood, Shakespeare was a little naive. Because his monsters had doubts, bad dreams, pangs of conscience, guilt.” Shostakovich doubts that his tormenters ever see “the spirits of the dead rising to reproach them.”

As readers of this blog can probably deduce, Barnes is one of my favorite writers. I bought this book without even looking to see what it was about; I knew if it was by him I would be intrigued and challenged and ultimately changed. I have been, it’s true. And also chilled by this look at what seems to be coming to my country and too many others.

What books have you read about trying to work as an artist under a dictatorship?