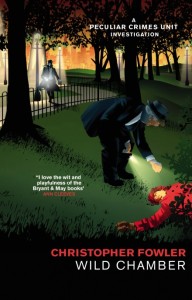 What a comfort reading is during this dark time! There is much to be afraid of and loved ones to be afraid for, but it’s important to take a break sometimes, be somewhere else for a while.

I’ve been reading Fowler’s Bryant and May detective series in order. The two head up the Peculiar Crimes Unit, a division of the London police formed during WWII to handle cases that could cause public unrest. Persisting into the present, it operates like no police department you’ve ever encountered and is constantly under threat of closure by traditional-minded administrators.

Arthur Bryant has his own methods which involve consulting museum curators, white witches, and his own offbeat but strangely useful collection of reference books. He’s a bit of a trickster, with a sly sense of humor. Having more depth than the typical English eccentric, I’ve come to delight in the odd turns his thinking takes, even odder as he ages and others begin to suspect the beginnings of dementia.

John May’s reputation as a ladies’ man has taken a bit of a beating as he ages. With a more logical approach to solving crimes, he tries to protect his friend from his wilder flights and is the only one who stands up to him.

The other members of the PCU are, well, characters in the sense of being unique, believable, yet a little quirky. For instance, Janice Longbright is enamored of the style of 50’s screen actresses—makeup, heels, hair, clothes, the whole shebang—but not terribly practically for chasing suspects down dark alleys.

In this outing, Bryant and May are investigating the murder of a woman in one of London’s parks and gardens, originally called (at least once) its “wild chambers”. This garden is in an exclusive crescent, so it’s kept locked with only residents having access. How could a killer have gotten in? Where is her missing husband? And what does her murder have to do with one of Bryant and May’s cases a year earlier?

Since I’m unable to go to England this spring as planned, I especially relished the way the investigation led through many of London’s parks and gardens, calling up sweet memories for me.

In fact, London is the real protagonist of this series. The solution to the crimes almost always hinges on Bryant’s arcane knowledge of London’s past, whether it’s the history of Bedlam, the routes of lost underground rivers, or forgotten details about St. Pancras Old Church and King’s Cross.

Interestingly, Bryant and May is also the name of London-based company that ran match factories in the 19th century before being absorbed by other companies.

These two detectives would fit perfectly into a Golden Age mystery, though their stories are a bit darker than those standards. The stories don’t really fit into the various subcategories of mystery. Bryant and May aren’t amateurs, but the stories aren’t police procedurals—unless you’re willing to accept a perfectly wacky procedure. They aren’t cosies exactly, but neither are they grim crime novels. What they are is delicious. Funny, infectious, knowledgeable about human nature and London’s long history: the perfect vacation.

What are you reading? Does it give you rest, comfort or courage? 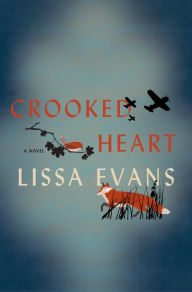 Lissa Evans’s fourth novel is set in and around London during the Blitz in WWII. The characters are ordinary people, not homefront heroes like midwives or wardens or detectives. Well, I say ordinary, but like the best fiction, Crooked Heart shows us how extraordinary each life may be.

In the remarkable prologue, we are introduced to orphaned 10-year-old Noel who lives with his godmother in Hampstead. Mattie, a suffragette in her younger days, has retained her free-thinking ways, treating Noel to an eccentric and wonderful education. However, she is beginning to suffer from dementia. As she struggles to remember words and where she put things, the wordplay and accommodations between Mattie and Noel are wonderful to behold.

I’m generally not fond of prologues, but I loved this one. In fact, I thought it the best part of the book.

All good things come to an end, including Mattie, and ostensibly under the care of her cousins, Noel is evacuated to St. Albans. Unprepossessing and limping from a bout with polio, Noel is the last child to find a home. Finally, Vera Sedge snatches him up for the sake of the stipend and extra rations she’ll receive.

Vera, known as Vee, is a widow who barely makes ends meet by sewing notions for hats and engaging in various small money-making schemes. She has little affection to spare for Noel since she is absorbed in waiting on her no-good grown son and elderly mother who spends her time writing letters to Churchill.

Noel, however, is quite brilliant and, thanks to Mattie, creative at coming up with unusual solutions to problems. He and Vee become partners in petty crime.

Much of the joy in this book is seeing how their relationship develops. The description of wartime London, where the two conduct their activities, is brilliant. More than what it’s like to take refuge from the bombs in a shelter or the unsettling disappearance of buildings, we learn about the plethora of minor crime going on while ordinary mores seem to be suspended. I also enjoyed the glimpses of regular life continuing during the Blitz, how people adjust to the new normal.

Much of the story is light-hearted, but it has its dark side—and I’m not just talking about bombs. The reader cannot help but share Vee’s ongoing panic about how to make ends meet and the extremes she’s willing to go to in order to pay the rent—just like today when so many are struggling to survive.

How can you not consider stealing a loaf of bread if your children are hungry? And I’m not just talking about the Blitz or Jean Valjean. People are starving today, even in the richest country in the world. People—especially single mothers—are unable to pay the rent and are thrown onto the street.

I’m sure there are those who would describe this novel as charming or heart-warming. Perhaps it is my own background that makes me so aware of the shadow of desperate poverty that haunts the comic shenanigans of Vee and Noel. As in drawing, thought, the shading adds depth and power to this story.

Have you read a novel that is by turns funny and sad, light-hearted and dark?