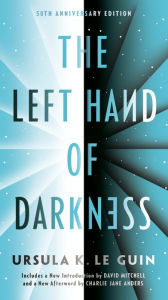 If you haven’t read this classic, stop right now and go read it. Came out in 1969? No problem: it couldn’t be more relevant to today. Don’t like science fiction? Won’t matter; there aren’t any space battles or robots; just beings you will recognise going about their lives. And any initial questions you might have about the culture you’re reading about are exactly the point.

Genly Ai, who is from Terra, has been sent as an envoy to the far-away planet of Gethen. He is there to invite the inhabitants to join the federation of planets, one that makes trade possible and mediates disputes but does not rule its members. Gethen has no space travel capability, so its people initially cannot believe that Genly comes from another planet, despite his vehicle and slightly different appearance. The federation has sent only one person as an envoy to reassure the people that it is not an invading force.

Gethen’s climate is so harsh that the planet is known as Winter. It is divided into two major nations: Karhide and Orgota. It is to Karhide that Genly goes first.

What is most baffling to Genly is that Gethen’s inhabitants are androgynous. They only take on gender characteristics for a few days once a month, a time they call kemmer, when sexual interactions are taken for granted. They could be female one month, male the next. The rest of the time, they have no gender. Genly keeps trying to overlay his gender preconceptions on the people he meets, for example, distrusting what he sees as the feminine side of Estraven, the prime minister of Karhide who has done the most to validate Genly’s story and promote his work.

As the story opens, Genly is at last about to have an audience with the king of Karhide, said to be mad. However, the night before the audience, Estraven invites Genly to dinner and afterwards tells him he can no longer assist Genly and has not recommended his cause to the king. Feeling betrayed and angry, Genly leaves, but at his audience the next day he learns something that makes him see the evening in a new light.

It is this that is most fascinating to me in this story. Confronted with a foreign culture and despite all of his diplomatic training, Genly constantly misunderstands or guesses blindly at meaning, distracted and misled by his own cultural frameworks.

What could be more relevant to today’s fractured and polarised world? How do we learn to set aside our preconceptions and see each other?

And on top of this is what Genly perceives as gender confusion. Having taken the power politics inherent in gender roles out of the equation, the difference in the resulting cultures is fascinating. And promising for the world many of us would like to see.

For one thing, there have been no wars. Disagreements, skirmishes, certainly. But that’s all. However, now a border dispute between Karhide and Orgota threatens to change that, as power-hungry politicians try to cultivate a previously-unknown sense of nationalism. Brexit, anyone?

With all these fascinating themes, you’d think this would be a dense story, a slow read. It is anything but! Le Guin spins the tension so tightly you barely have time to catch your breath, culminating in a thrilling escape that touches some of our own near-mythical stories.

All I can say is: Read it now! Let’s talk about it.