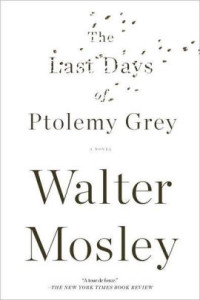 With this novel, Mosley takes us on a different sort of journey. It’s a standalone novel, not part of one of Mosley’s mystery series. Here we are lured into the mind of ninety-one-year-old Ptolemy Grey, a mind that is fraying at the edges.

Ptolemy lives by himself, surrounded by piles of newspapers and boxes, listening simultaneously to classical radio and television news. He relies on his grandnephew Reggie to take him to the bank and grocery, afraid to go out by himself or answer the door to anyone but Reggie ever since a large drug addict named Melinda began terrorising him and stealing his money. Physically frail, he also forgets things that have just happened or been said, finding his mind wandering back to people and incidents from his childhood.

When Reggie is killed (not a spoiler; we learn this in the first few pages), his place is taken by Robyn, a teenager who has been living with Ptolemy’s grandniece, who took Robyn in when her mother died. At first Robyn visits, accompanying him on errands, but appalled by the state of his apartment, she begins cleaning and clearing. Gradually the old man and lonely girl become friends.

Mosley captures the constant threats to an attractive young woman. Even before the stories that have come out through the #MeToo movement, Mosley shows how men assume they have a right to come on to Robyn and become angry when she rejects their advances. The girl carries a knife for protection and isn’t afraid to use it.

But this is Ptolemy’s story. There’s something he still has to do, an unfulfilled mission dating from his childhood. Buoyed by Robyn’s care and companionship, he’s willing to take terrible risks to accomplish it.

The book is a fascinating exercise in deep point of view (POV), also known as free indirect discourse. Most of us learned in school the difference between first- (I), second- (you) and third- (he, she, it) person POV, and omniscient POV.

As I mentioned in the blog post about James Woods’s How Fiction Works, there are variations of third-person POV. Deep POV takes the reader completely into the protagonist’s world, not just being told only what they see, hear, etc., but actually experiencing everything directly, as though you are inside the character’s mind.

Of course, this can get a bit suffocating. The trick is to move between levels, like a camera coming in for a closeup or pulling back for a long shot, without giving the reader whiplash.

Mosley accomplishes this gracefully. Looking at the first scene, we begin with a distant third-person, with the protagonist simply “the old man” answering the phone. On the second page we move in a little closer, getting some of his thoughts: “He was certainly there, on the other end of the line, but who was it? the old man wondered.” Then a few paragraphs later we move fully into his mind, with no “reporting words” as a tag, before moving out again:

Was the voice coming from the radio or the TV? No. It was in his ear. The telephone—

“Who is this?” Ptolemy Grey asked, remembering that he was having a phone conversation.

Mosley continues this dance, effortlessly moving in and out of the old man’s mind, never losing the reader, and making it all seem the most natural thing in the world.

Another aspect of this book that I appreciated is the way Mosley handles descriptions of new characters as he introduces them. As I mentioned in a blog post of one of his other books, he often gives a little physical description with some telling detail. Here are a bank teller and a man who runs a gym:

She was a dark-skinned black woman with bronze hair and golden jewelry around her neck and wrists and on at least three fingers.

The man who asked the question was on the short side but he had extraordinarily broad shoulders and muscles that stretched his T-shirt in every direction. His face was light brown and his neck exhibited the strain of a man pulling a heavy weight up by a long rope.

A high-yellow woman was slumped across the blue sheets of the bed, crying, crying.

“How are you, my friend?” the old, ecru-skinned Middle Easterner asked. He took one of Ptolemy’s big hands in both of his, smiling and nodding as he did so.

Sometimes he lets imagery do much of the work, saying of the woman who would become Ptolemy’s beloved second wife: “Her yellow dress made its own party”.

Mosley’s novels are always entertaining, but for me as a writer they are also a masterclass in writing craft.

Do you like novels that immerse you in the protagonist’s world?