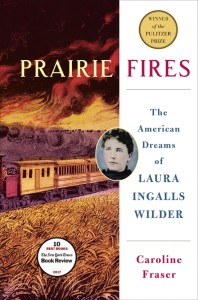 A friend recommended this book so vehemently that she actually sent me a copy. As I mentioned before, I’d never read the Little House books, so I’ve been catching up on them as I read this biography. Wilder always maintained that her stories were true, but questions arose even as the books were taking the world of children’s literature by storm. Now Fraser’s meticulously sourced account shows what is fact and what is fiction in those books.

That is not a criticism of Wilder. She was writing for children and wanted to spare them the most devastating details. She was also writing to memorialise her parents, her father in particular, so of course she managed the details to show them in a good light.

For example, one thing that was obvious to me reading the books as an adult, even without Fraser’s clarification, was that Wilder’s father was not above stealing, as when he knowingly tried to homestead on land that belonged to the Osage. He was also terribly reckless, constantly dragging the family away from security to chase a dream of a self-sufficient farm far from other people.

Fraser makes clear the near impossibility of achieving that dream, given the lack of federal programs at the time, the uncertain and often disastrous natural conditions—drought, storms, locusts—and the unsuitable land set aside for homesteaders. There is much here for us to consider looking at today’s situation: ongoing ecological damage that has put us on the edge of another Dust Bowl, the difficulty of making a small farm work even with boutique vegetables and the growth of farmers’ markets, and the near takeover of agriculture by enormous farms run by corporate agribusinesses with large federal handouts.

Yet, as the book’s subtitle, The American Dreams of Laura Ingalls Wilder, asserts, that image of the self-sufficient pioneer pulling himself up by his bootstraps is a big part of the U.S.’s mythology. Much of the credit for that goes to Wilder’s books, as Fraser’s account shows.

As an adult, however, I could glean even from Wilder’s idealised stories that the family often depended on the help of others. The truth is even more substantial, not only during Wilder’s childhood, but even as an adult when she somehow didn’t see the hypocrisy of decrying government assistance while receiving federal money herself. Just as many of the people today who hate the government are the ones themselves receiving the most assistance.

Before reading Fraser’s book, I was unaware of the influence of Wilder’s daughter, Rose Wilder Lane, on the books and on her mother. It was Lane, already a journalist, although one who larded her stories with fictional elements, who pushed her mother to write the books. It was Lane who first edited them, with the two wrangling over changes. Lane also wrote her own books, appropriating some of her mother’s stories and penning a thinly-veiled Mommy Dearest novel.

Fraser treats Lane fairly, acknowledging her strengths while not hesitating to point out her weaknesses. She presents her as emotionally unstable, with several nervous breakdowns, and increasingly prone to paranoid conspiracy theories. Lane was part of the triumvirate of Founding Mothers of the Libertarian movement, along with Ayn Rand and Isabel Paterson. She also pushed her mother to join her in her angry rants against the government, adding political screeds to some of her mother’s later books.

Of course, we are still struggling with the effects of Lane’s work. Many of today’s politicians criminalise the poor, condemning them for needing assistance. Many demand that the federal government be downsized, if not disbanded, while living high on the hog on federal money themselves, ignoring the hypocrisy. An egregious example is Maryland Republican Andy Harris who campaigned on doing away with the Affordable Health Care Act, which would take away heath care from up to 10 million citizens, complaining when elected that his taxpayer-funded health care wouldn’t take effect for a month.

It is no wonder that during the Great Depression and WWII people flocked to Wilder’s simple tales of a loving family, enduring hard times together, as embodied by a line from a hymn that recurs in the books: “We are all here.”

The Little House books are lovely fairy tales for children, but not something to base a nation on. However, even if we question the myth of a self-sufficient, rugged individual, many of us today embrace other values extolled in Wilder’s books: the importance of family, being happy with simple things, pulling together and being brave when things go wrong.

Even if you’ve never read the children’s books, this biography is essential to understand how we in the U.S. have gotten to where we are today.

What book have you read that illuminated an historical era and its effects on us today?