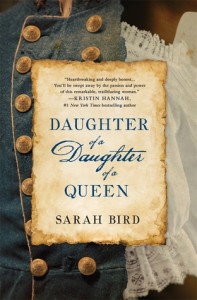 What an absorbing read! Bird takes the bare bones of a forgotten slave, Cathy Williams, who posed as a man to join Sheridan’s army near the end of the U.S. Civil War and was the only woman to serve with the Buffalo Soldiers. Then she fleshes those bones out in this captivating novel and clothes them, not just with uniforms but with fully imagined bindings.

When Sheridan on his quest to starve out the Confederate army raids the already-depleted Missouri tobacco farm, he finds little left to take: a scrawny chicken, some sweet potatoes, and a slave to help his cook. He thinks the slave he’s confiscated is a boy because of his britches, and Cathy quickly discovers that she needs to keep up the disguise if she’s to survive. Glad to be free of her cruel mistress but miserable at being torn from her mother and little sister, she calls herself William Cathay.

As a writer, I was intrigued by the choices the author had to make. What kind of woman could not only survive, but become an integral part of an army of men? Bird’s answer: a woman whose mother never let her child forget that she was the daughter of the daughter of an African queen, a mighty warrior who may have been captured and sold into slavery but never lost her pride and spirit.

How would the author handle the bathroom issues, often ignored in historical fiction, but so important here to Cathy’s disguise? Bird comes up with creative, believable solutions, not just for bathing and peeing, but also for Cathy’s “monthlies”.

How much historical context of the Civil War and the Buffalo Soldiers campaign against the Indians would she include? Bird makes the smart choice to tell the story as a memoir, in Cathy’s distinctive and engaging voice. In keeping with that choice, she concentrates on the vivid details of daily life—the size of cooking pots, tea with blackstrap molasses and condensed milk, training new recruits with hay and straw, the things that Cathy would have noticed—and leaves out the big events that Cathy wouldn’t have been aware of.

What about real historical figures? Too little is known about the real Cathy to guide how she is portrayed. I’m no expert on Sheridan and Custer, the only other real figures besides a glimpse of Lee at Appomattox, but the way they are shown here is consistent with their actions.

If I have one quibble with this novel, it is in the characterization. Cathy herself is brilliantly brought to life, and two other characters, Sheridan and the cook Solomon, are complicated men who evolve during the story. However, the other significant characters are either all good or all bad. The remaining black soldiers have no moral sense beyond immediate gratification and are easily led. The Indians, whom the Buffalo Soldiers are sent to quell, are an undifferentiated vicious and terrifying horde, though to be fair that is probably all Private Cathay would have known of them.

Of course there is a love story—it’s rare for female characters to be allowed any other plot—but luckily it is but one strand in the many stories of friendship and courage and leadership.

If you’re looking for a tale of a strong woman succeeding against terrible odds, if you want to be immersed in a time other than our own suddenly grim one, check out this novel.