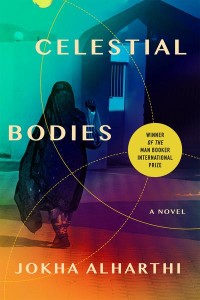 I’m in a few book clubs and, luckily for me, they are all interested in reading more diverse authors, hence this Man Booker-winning novel by Alharthi, who is an author and university professor from Oman. It is the story of three sisters and their extended family in a rural village outside the capital of Oman during the late twentieth century when the culture in that country was rapidly and unevenly changing.

Mayya, the oldest sister, doesn’t have much to do with the outside world, preferring to stay at home sewing. When her parents inform her that she will be married to Abdallah, son of the merchant Sulayman, they do not know she’s in love with a young man recently returned from London, whom she’s seen from afar twice. Mayya obediently marries Abdallah but names her first child, a girl, London.

Asma, the second sister, finds her joy in books and traditional religion. When her parents inform her that Khalid wants to marry her, she insists on taking a few days to decide, but eventually agrees. He is an artist whose ideal wife, as it turns out, is someone who will fall “into the orbit he had marked out, who would always be there but would also always stay just outside, yet without wanting to create her own celestial sphere, her own orbit.”

Khawla is more modern, wearing lipstick and adamantly refusing to marry anyone but her beloved Nasir who eventually rewards her devotion by marrying her but immediately decamps for Canada where he lives with his girlfriend, returning more or less annually, just long enough to get the faithful Khawla pregnant.

Marriage is not the only area where customs and mores are changing. Social classes, education for women, contact with the outside world: all of these are in motion and thus reflected in the fluidity of the book’s structure. Instead of a single plot with subplots, there are a multitude of plot threads that come to the fore and disappear, sometimes returning, sometimes not, a structure that seems to mirror what life was like for those living through such upheaval.

The brief chapters shift between a multitude of voices, making all of us in the book club rely heavily on the genealogical chart in the front of the books. Most chapters move between the sisters’ voices and those of others: their parents, London, even Zarifa, originally Sulayman’s slave, now a servant and his mistress. Almost all are women’s voices. We all preferred the book’s original title, literally translated as Ladies of the Moon.

These are interspersed with chapters of Abdallah’s first person narration. We questioned why a man should have so much real estate in a book primarily about women and be the only one addressing us directly. The only thing we could think of is that his prominence reflects the male privilege still dominating the culture. The irony is that although Abdallah’s chapters all take place on planes (he flies around the world for work), he and the other men are the characters most confined and hobbled by their roles.

Time is also extremely fluid in this book, sometimes moving decades forward and then backward into the past all in the same paragraph. Readers like me who tend to prefer a mostly linear and chronological plot may struggle to keep track of what is going on and who the characters are. Yet the effort brings a huge reward, not just in a glimpse into a—for me—unfamiliar culture, nor just the vivid and sometimes intoxicating language, but also the enlightening experience of navigating a changing world.

What diverse voices are you reading?