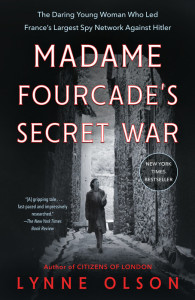 I recently posted about Sonia Purnell’s excellent A Woman of No Importance about Baltimore-born Virginia Hall who became one of the first British spies in German-occupied France during WWII. She organised Resistance units and provided critical intelligence to the Allies through the Special Operations Executive (SOE), a secret UK intelligence agency formed in 1940.

I hadn’t planned on reading Olson’s book about Marie-Madeleine Fourcade who also ran a Resistance operation in France, supplying critical information to MI6, the UK’s Special Intelligence Service. Then my book club chose it.

When her partner was arrested in 1941, Fourcade became head of Alliance, a Resistance network she had helped build. Under her dedicated leadership, Alliance expanded throughout both Occupied France and Vichy France (where Hall was based), providing most notably a 55-foot-long map of the beaches and roads along the Normandy coast, showing German guns and fortifications, an invaluable aid to the Allies on D-Day.

What I missed was a sense of Fourcade herself. In Purnell’s book we get a close view of Hall, what makes her tick, how she responds to her experiences. In Olson’s book it is more “just the facts, Ma’am.” For example, Fourcade’s hardly ever seeing her young children during the war years for security reasons makes sense, and she didn’t know they’d lost their adult protector and had to make their way alone through war-torn France. But surely she felt a complex swirl of emotions, constantly changing, eating away at her resolution to stay on as head of Alliance. None of that comes through.

One thing that struck me strongly in both books was the infighting. I’m not just talking about Vichy versus Resistance. In the UK, SOE and MI6 were fiercely competitive, trying to deny each other resources, sometimes even sabotaging each other’s efforts. Similarly de Gaulle’s Free French group refused to help Virginia Hall’s group or other French fighters and eventually broke with MI6 as well. Also, one of Roosevelt’s conditions for the U.S. joining the war was that de Gaulle not be in charge of the French forces. He chose instead someone else who was not respected by the French military, making the North Africa campaign a debacle. They were supposed to all be on the same side! It’s a miracle the Allies won the war.

Of course, I see the same thing going on in politics today, in country after country. Too many people who are supposed to be serving the country and doing the best thing for its citizens are choosing instead to maximise their own power and fortune over that of their fellows, not caring how much devastation they cause for their country and its people.

I suppose I shouldn’t be surprised. When I started work in an office, I quickly realised that I could divide my colleagues into those who wanted to do good work and those who only wanted to get ahead. It’s been a useful distinction ever since. Not that I’m entirely cynical. I recently learned of a real Lord of the Flies where the shipwrecked boys marooned on a Pacific Island worked together and took care of each other for 15 months. And we are beginning to learn that cooperation has been just as longstanding and crucial in our societies as competition.

I’m encouraged by Fourcade’s selfless devotion to her country and to the operatives she’d collected. No wonder she was designated as a hero by de Gaulle at the end of WWII.

Are you reading stories—fiction or nonfiction—about courage and selflessness? Suggest a few!