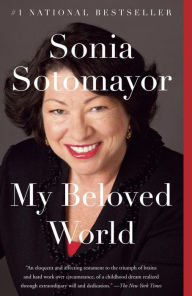 These days I’m on the lookout for positive stories. I can only bear an hour or two of news early in the day, leaving me time to bury my dismay and disgust with normal daily activities before darkness comes.

I came to this memoir by the Supreme Court justice—the first Hispanic and only the third woman—with some hesitation. I knew it would be a story of success, but feared it would might be saccharine and superficial.

I needn’t have worried. Sotomayor is an excellent writer. Her prose is clear and flows well, developing scenes and narrative that a reader can easily follow. I think this skill must have been honed in her written arguments, where logic and emotion must both be consistently deployed.

It can be hard to find the right tone in a memoir. You have to describe your successes in a way that doesn’t come across as bragging, not even a “humble brag”. You have to talk about the obstacles in your way without whining or succumbing to a woe-is-me mentality. You have to be open about your failures.

Sotomayor starts by describing a scene soon after her diabetes diagnosis when both of her parents argue about giving her the insulin injection she needs. Burdened by their sadness, seven-year-old Sonia decides to learn to prepare the injection and give it to herself. The scene is a good introduction, not only to the challenges facing her—illness, financial hardship, cultural difference—but also to what she calls “the native optimism and stubborn perseverance I was blessed with.”

I understand. I often say that I am lucky to have been born with the happy gene. I’m less good at perseverance, but Sotomayor shows in situation after situation how extra effort can compensate for other gifts.

What keeps this memoir of her successful rise in the legal world is two-fold. For one thing, there are plenty of stories of failures mixed in with the successes, misery among the happy times. The other is the credit she repeatedly gives to others who have helped her along the way. On the first page of the first chapter, right after her remark about optimism and perseverance, she says:

At the same time, I would never claim to be self-made—quite the contrary: at every stage of my life, I have always felt that the support I’ve drawn from those closest to me has made the decisive difference between success and failure.

It is this generous spirit, shown also towards her parents where her love for them shines through even when she describes their failures, that makes me want to cheer her on and give her more credit than she gives herself.

Another challenge of writing a memoir is deciding what time frame to choose. I think she made a wise choice to start with her independent approach to her diabetes and end with her first becoming a judge. Since becoming a judge was her dream from the beginning, it ties up the story neatly.

If you’re feeling low, I recommend this book. As she says in the preface, “People who live in difficult circumstances need to know that happy endings are possible.” Although our circumstances are dissimilar and our ideas of what makes an ending happy differ, her story lifted my own spirits.

What book have you read that brightened your day?