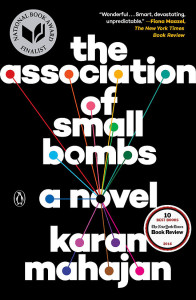 The winner of several awards and places on best books of the year lists, this second novel from Mahajan examines the results of a bombing. Not some large, well-publicised terrorist attack, the event that starts the novel is a small bomb set off in a marketplace in New Delhi, killing—among others—two brothers and seriously injuring their friend.

The story examines the repercussions of this event on the parents of the two boys, the friend, and the terrorists themselves, including one who is drawn into their orbit later. By adopting this structure, Mahajan sets himself a serious challenge.

In my opinion and despite the fervent praise heaped on this book, he fails to meet this challenge. Confining the different stories to separate and clearly defined sections keeps the reader from getting confused. However, the lack of a single protagonist leaves the book empty at its core. As soon as we start to get interested in a character, the father for example or the bomb maker, his story is dropped entirely. It may be picked up again a hundred pages later or it may not.

As a result, the novel is interesting and informative, but not engaging. Contrary to the frenzied reviews, the book is neither thrilling nor urgent. Most of the people in one of my new book groups found it boring and had to force themselves to read on. Contributing to their malaise was the trajectory of the characters: they start off miserable and go downhill from there.

Of course, it is possible that the author intended for the book to be empty at its core, as though the center had exploded and destroyed everything, including our notions of narrative.

There are also some continuity problems that an editor should have picked up, a few inconsistencies that are jarring. And the ending is disappointing. Like too many books these days, it felt as though the author got tired of writing but didn’t know how to end it, so we get a series of brief this-is-what-happened capsules for the major characters.

It’s a shame because the novel brings to light an important subject. While we hear in the news about shocking terrorist attacks, I for one had no idea that so many of these small events were happening. Since 1970 there have been nearly 10,000 in India alone. In the single month of May, 2016, there were 207 terrorist incidents around the world, in countries in the news such as Turkey, Iraq and Afghanistan, but also in places like Yemen, Egypt, Burundi, Tanzania, and the Philippines.

Mahajan does a great service by bringing these to light and demonstrating that, despite their smaller scale, their impact is no less tragic. My book group wondered what purpose could be achieved with this barrage of terror. Of the three terrorists in this book, one was said to be motivated by nationalist concerns (Kashmiri independence), one by religious discrimination, and one by rage at a politician.

Yet, as we have seen, such actions do not convert anyone to their cause and are too small to be remarked upon in the media or remembered by those not immediately affected. Some wondered if a deeper cause might lie in the mix of rage and fear and powerlessness that in the U.S. leads single white men and boys to pick up a gun and shoot up a restaurant or concert or school. There is no logical plan to achieve anything. Rather it is an explosive desire to be seen and heard. One person compared it to a toddler’s tantrum.

I urge people to read this book because it is important subject that most of us know little about. Don’t look for what you might normally expect in a novel, though the settings are beautifully described, both the places and the communities. Look instead for new insights into one of our greatest challenges: how to live together in peace.

Did you know about the number of terrorist incidents occurring every day around the world?