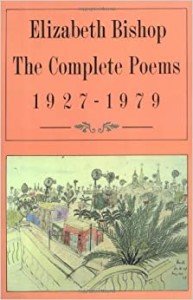 Although she won the 1956 Pulitzer Prize for her collection Poems: North & South/A Cold Spring, Bishop’s was not well-known during most of her life except among other poets, overshadowed by poets such as her friends Marianne Moore and Robert Lowell, as well as the Beat poets, William Carlos Williams, Randall Jarrell and others.

When she began teaching during the last decade of her life, first at the University of Washington and then at Harvard, she did begin to achieve a wider fame, but it is only since her death that her reputation has risen into the stratosphere. Now she is considered one of the best poets of the 20th century.

I’m not entirely sure why that is. Partly it’s a reaction to the explosion of confessional poetry set off by Lowell’s Life Sentences, the rise of political and feminist poetry, and the general abandonment of formal poetry: all trends that she rejected.

Partly it is an appreciation of her attention to craft. A perfectionist, she labored for years over most of her poems, refusing to publish them until she was satisfied. While she often creates her own form, sometimes she uses forms such as sestina and villanelle. One of her most famous poems, “One Art”, is a villanelle beginning:

The art of losing isn’t hard to master;
so many things seem filled with the intent
to be lost that their loss is no disaster.

Lose something every day. Accept the fluster
of lost door keys, the hour badly spent.
The art of losing isn’t hard to master.

What I like best about her poetry, and possibly the most significant reason for her popularity today, is her use of the things of this world. Her poems have precise descriptions of objects and animals, often insignificant things, such as an old French horn hung on a wall or leaves drifting in the Seine. In the best poems, these descriptions carry an emotional weight far beyond the thing itself.

As a writer, this use of subtext is what I’m always striving for. It’s far more powerful than explicit text because you are leaving space for the reader to have their own experience. You are creating the gaps that Robert Bly speaks of in Leaping Poetry, the kind of gaps that the reader must leap over, an opening for the unconscious or for buried memories to bubble up. This space is also what gives imagery its power.

In this excerpt from “The Fish”, we can see her use of imagery, choice of details, and surprising adjectives not only to bring the fish to life but to invest it with meaning.

He was speckled with barnacles,
fine rosettes of lime,
and infested
with tiny white sea-lice,
and underneath two or three
rags of green weed hung down.
While his gills were breathing in
the terrible oxygen
—the frightening gills,
fresh and crisp with blood,
that can cut so badly—
I thought of the coarse white flesh
packed in like feathers . . .

We learn that “five old pieces of fish-line” hang from his lip. Through this “battered and venerable” fish we are caught up in her themes of surviving trauma, of loneliness, of grief and loss. And note the resonances around those two adjectives: “battered” carrying also the image of a sizzling frying pan, “venerable” not just old but something to be honored.

There was controversy around the posthumous publication of this collection because it also includes juvenilia and unpublished poems, which seemed to many an insult to a poet so meticulous about what she allowed to be published. Still, it is interesting to see something of her development as a writer and what she still considered works in progress.

Do you have a favorite Elizabeth Bishop poem?