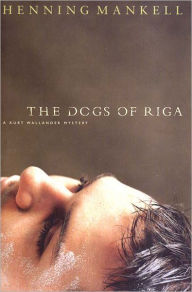 I came to the corporate world from teaching where even the most cynical and disillusioned co-worker started from a place of caring about the children. When I started working in the corporate world, however, I quickly realised that there were two sorts of people there: those who cared only about getting ahead and those who cared about the work itself. Inspector Kurt Wallander is one of the latter.

Here, Wallander investigates the case of two dead men washed ashore in a life raft. Apparently in their mid-30s, dressed in expensive clothes with their arms wrapped around each other, both men have been shot through the heart. The previous day, one of Wallander’s younger colleagues had taken an anonymous call that a raft with two dead bodies would be washing ashore. At the time, Wallander decided to alert the coast guards and then wait and see what happened.

Wallander is not averse to waiting. He can act and does, but he takes a measured and intelligent approach to his job. Unfortunately for him, the ramifications of the case take him out of his comfort zone, out of his city and even out of his country. He must take action in an atmosphere of uncertainty, guesswork, and peril for both himself and others.

Once it is determined that the two men probably came from Latvia, Wallander is relieved to turn over the investigation to his Latvian counterpart, Major Liepa, whom he recognises as a policeman after his own heart. When the two talk late into the night over a bottle of whiskey, Liepa explains that he is a man of faith, though he does not belong to a religion. He cares about “the fight for survival”, which to him includes “the fight for freedom and independence.”

Another murder drags Wallander back into the case and sends him to Latvia, where he has to negotiate places, people and power structures that are foreign to him.

This is the third book in the Wallander series, first published in Sweden in 1992. The date is significant because, as Mankell describes in his Afterword, “Just a few months after this book was finished, in the spring of 1991, the coup took place in the Soviet Union—the key incident that accelerated declarations of independence in the Baltic countries.”

While the story is intricately plotted, with many unexpected twists and turns, the real joy of the book for me is Wallander as a character. We see much of his life outside of work: oppressed by the intense cold, navigating a difficult relationship with his elderly father, thinking of his daughter Linda who is away at college, and often missing his friend and mentor Rydberg who has died of cancer only a month previously.

Such scenes, which seem irrelevant to the puzzle of the two men in the life raft, help us with the puzzle that is Wallander himself. And each scene echoes through the story, adding context and color to Wallander’s thoughts and choices and actions.

I love the realism of this portrayal. Wallander gets discouraged; he needs to stop and rest sometimes or eat or use the washroom. He questions himself, at one point describing himself as “a Swedish police officer in early middle age, one who has completely lost his sense of judgment and gone out of his mind.”

But he goes on. Offered opportunities to leave and return to his safe desk in Ystad, Wallander is tempted but plows ahead, driven by the core of integrity that I most appreciate in those around me and in the protagonists with whom I choose to spend my time. These are my heroes, whether sitting at a desk near me or in the pages of a book: however flawed, they labor for something larger than themselves.

Who are some memorable characters from novels you’ve read?

One thought on “The Dogs of Riga, by Henning Mankell”