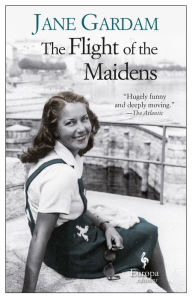 Recently I encouraged my new book club to read Tell the Wolves I’m Home, by Carol Rifka Brunt, a book which I enjoyed tremendously. Some people in the book club enjoyed it, but a couple of others said that they were put off by it and skimmed over it to read the ending. They said that because it was the story of a 13-year-old girl, they felt that they had lived through that stage and suffered that angst and did not want to relive it. I was surprised because part of why I loved the story so much was that I identified so strongly with the protagonist. I loved her imagination and could certainly identify with her struggles with her sister.

I expect that those same book club members would not enjoy this novel by Jane Gardam. It is the story of three young women who are a little older at 18. As it begins, they have just learned that not only have they gotten into the excellent universities to which they have applied, but they have received the state grants that will enable them to attend. The story then covers the two months as they prepare to leave home.

This is a remarkable time, this time of disentangling oneself from parents and childhood friends. Even more terrifying and exciting is that in this liminal space you can determine who you want to be, now that you have this great opportunity to present yourself as a different person to the world.

When you go off to school, where no one knows you, you can leave behind the person you’ve been for 18 years. Gardam’s choice of time period adds to the uncertainty: it’s 1946; the Second World War has only been over for a year; and everyone is adjusting to the new nuclear reality and the shocking news from Bergen-Belsen and Auschwitz.

Hefty has decided that at university she will be called by her full name Hester. She’s eager to escape from her clinging intrusive mother, whom she cannot help but love, just as she loves her father, who was greatly damaged in World War I. Once a promising scholar, he now digs graves and wanders about.

Her brilliant best friend Una has become a bit more distant this year, since Hetty took up with—and became engaged to—a pleasant milquetoast of a man. Una has been spending much of her time with her longtime friend Ray, once the fish boy and now working for the railroad. Una and Ray are mad for cycling but curiously silent with each other. Una’s mother operates a run-down hair salon in their home and has a hap-hazard approach to parenting

The third girl is Leiselotte, a German Jew brought to England in the 1939 kindertransport and placed with a Quaker couple. She has not been notified of her parents’ fate all these seven years. A quiet girl, who spends her free time knitting, she has kept to herself up till now, but is thrown together with Una and Hetty by their awards.

Like my friends I remember only too clearly that time of my life and at first was not sure that I wanted to relive it. However, I have been charmed by many of Jane Gardam’s novels and had great faith that she would intrigue me. I was not disappointed. Gardam fills out the cast with marvelously eccentric English characters and, as always, her prose is acerbic enough to offset any incipient nostalgia for the past.

I was most intrigued by the push-pull between the girls and their families at a time when it was unusual for girls to go off to university. With humor and insight, Gardam navigates these subtle currents of love and independence.

Does the age of the protagonist make a difference when you are choosing what to read next?