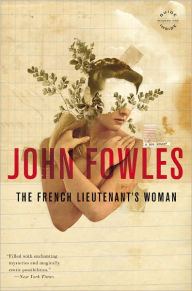 Since I was due to visit Lyme Regis, I decided to reread this 1969 novel which is mostly set in that seaside town. Of course, my first memory from reading it almost 50 years ago was the gloriously romantic opening image of a woman, dressed all in black, staring out to sea from the end of the Cobb.

The Cobb in Lyme Regis is a mole, a grey stone wall that curves out into the sea like an arm protecting the harbor. It features in Jane Austen’s Persuasion where it is the scene of Louisa’s downfall as she attempts to jump into Captain Wentworth’s arms.

Fowles’s mysterious woman is Sarah Woodruff, a disgraced woman who according to gossips had run off with and been abandoned by the eponymous officer. She’d met him while he was recovering from a shipwreck in the house where she then worked as a governess.

She is observed by Charles Smithson, a privileged young man who considers himself a Darwinist, and his fiancé Ernestina Freeman, whose conventional views belie her surname. As part of his scientific pursuits, Charles hunts for fossils, reminding me of my recent reading about Mary Anning. He leaves Ernestina at home when he goes on these expeditions, so is alone when he encounters Sarah later and resolves to try to help her.

While written in the style of and using the conventions of Victorian literature, the story is narrated from the point of view of a modern-day man. With epigraphs and footnotes and commentary in the text, this narrator provides social and historical context for the struggles of his Victorian characters, sometimes criticising them, sometimes commiserating with them. He also openly discusses the problems and choices the writer faces in putting the story together.

This self-consciousness places the book in the wave of postmodern metafiction in the 1960s. Another metafictional aspect is that the narrator provides three possible endings.

While the “I” of the narrator calls himself a “novelist”, it seems to me he is instead yet another character rather than Fowles himself. He even shows up as a character near the end.

Thus, Fowles has quite a few plates to keep spinning. He risks losing the story’s momentum with his digressions about Victorian mores and morality or the clash of religion and science.

Yet these challenges for the reader play into the theme of free will, the monster released from its chains by Darwin and his colleagues. What are the risks when the strict conventions of religion and social convention are shown to be shams? How do we comprehend the world—or the world of the novel—when the framework we’d always used begins to dissolve? When are we most free, when we are “working well within a harness” as Frost says or when we take responsibility for living an authentic life per Kierkegaard?

The other main thing I remembered from when I first read this novel was which of the three endings I preferred and what that said about me. Reading the book now, I find it much more complex than I remembered. It is the sort of book that repays multiple rereadings.

I plan to read it yet again to see how Fowles manages the omniscient point of view—the sort most rarely used these days. It’s an interesting choice, setting up an omniscient narrator—albeit one whose power and knowledge he undercuts now and then—for a story of the time when people were coming to terms with the idea that there may not be an omniscient and omnipotent god.

What novel have you read and reread, finding more in it with each rereading?