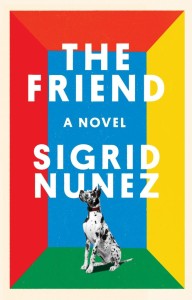 Nunez’s new novel, winner of the 2018 National Book Award, is a quiet and intelligent story of friendship, love and despair, tackling the questions most of us wrestle with at various times in our lives: Should I change my life? Is it worth going on as I have?

In examining these issues, the narrator addresses her longtime friend, a fellow writer and English professor, who has recently committed suicide. Closer than lovers, with a friendship more lasting than any marriage, the two had known each other for years.

The narrator too is appalled by much of the younger generation she is teaching, though for different, more intellectual reasons.

She ranges over a variety of subjects, bringing in literary anecdotes and references—making it a joy for a fellow reader. But every idea she takes up is ultimately related to learning to live with loss. Already isolated by choice—unmarried and most often solitary—she is tempted by her pain to move even further away from the world.

The external problem she faces is her friend’s dog, a Great Dane. Wife Three, the final one, insists that he wanted the narrator to take the dog after his death, even though he’d never mentioned it to her. The narrator, a cat person living in a tiny, rent-controlled, NYC apartment where pets are not allowed, is horrified.

Yet she takes him. And a relationship grows between the two. The dog, renamed Apollo by the dead man, becomes one of the strongest characters in the book. Yet grief looms here as well, for the dog is already close to the end of its brief life span.

Obviously this book will appeal to anyone who has given their heart to an animal companion. For those, like me, who enjoy animal company without necessarily having an intimate relationship with them, will enjoy the intelligent conversation, the insight into the world of writers and of teaching at the college level. And everyone will enjoy the humor that leavens the narrator’s sometimes gloomy subjects.

It is the narrator’s voice that carries this story. In a dry, unsentimental tone and using straight-forward language, she investigates the most dire, emotional problems we face. How are we to live? What makes it worth going on? What do we leave behind?

The only time the tone falters, for me, is when the author briefly plays a bit of a game with the reader. But that aside, this is a remarkable book, unlike anything you’ve likely read before.

Have you read a quiet novel that surprised you with its power?