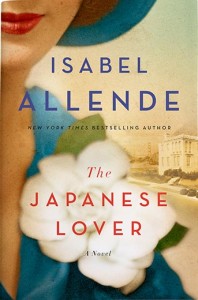 Allende’s new novel takes place primarily in Lark House, a fictional nursing home in California, where strong-willed Alma Belasco has established herself. She’s left the family mansion where she has lived ever since being sent out of Poland at the beginning of World War II, first with her aunt and uncle and then with her husband. Now she has entrusted it along with her philanthropic organisation to her bewildered son and daughter-in-law, who cannot fathom why a healthy woman would abandon her privileged life in favor of a modest room in a nursing home.

Irina Bazili, a care worker at Lark House, catches Alma’s eye and allows Alma to persuade her to work part-time as her personal assistant. However much she enjoys working with Alma and the other residents, Irina refuses to share anything of her own past or her private life, and resists the overtures of Alma’s grandson Stephen. Eventually, though, Irina and Stephen become intrigued by Alma’s past and the mysterious letters and bouquets that arrive for her and decide to find out the truth.

Along with the two young people we explore Alma’s past and her connection with Ichimei Fukuda, a calm and sensitive Japanese gardener who worked at her aunt and uncle‘s estate. Alma’s personal journey, as an artist and as a woman, takes place within the framework of late 20th century events, such as the French Resistance, the internment of Japanese-Americans during the war, and the AIDS epidemic.

I found the book a pleasant read, though rather flat, an opinion echoed by several members of my book club. What made it seem superficial was the lack of dramatic scenes; the story was almost entirely told as a narrative. One person who loved it had listened to an audio version, which would have been particularly appropriate for this story. Others found it a soothing, easy read, something sweet just before bed.

Not too sweet, though. The stories of the two couples—Alma and Ichimei, Irina and Stephen—are well-balanced and play against each other. Past losses and traumas come to light, shading the romantic and nostalgic elements.

It seemed to me that we skipped over large dramas, such as the war and the internment camps, too lightly. Having recently read Gretel Ehrlich’s Heart Mountain which beautifully explored the experience within and without such a camp, I felt let down by the brief nod to the experience.

Some of us had trouble keeping the characters straight. Although pleased to see an elderly woman as the protagonist and portrayed realistically, I had little interest in the characters. I was most curious about Ichimei’s wife, but she has only a miniscule role.

One person was offended by the romantic depiction of infidelity, calling Alma and Ichimei’s bond merely a fairy tale to mask what was only a sexual relationship. I confess I was a little put off by the infidelity being presented as a purely gorgeous and wonderful gift (hence my interest in the betrayed wife), but joined with the rest of us in appreciating the unusual love story. I wondered how many of my friends had ever felt a profound connection—some even referred to Alma and Ichimei’s bond as mystical—to someone aside from their spousesbut was afraid to ask. I have. I would not call such a bond a fairy tale, but I am also aware of the costs.

I did not think my book club would have much to talk about with this book, but was delighted to find that I was wrong.

However, our meeting was not the place for the deeper discussion that could have followed. I found myself wanting to ask questions like: What would you do if your spouse had this kind of deep connection with someone else? Would you insist that they never see the person again? Or would you be happy for them as long as it didn’t interfere with your own marriage? Would you rather not know?

Have you read any of Isabel Allende’s books? Which one is your favorite?