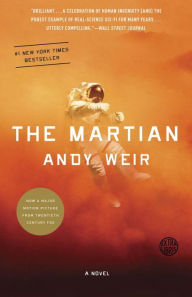 This novel opens with a punch as astronaut Mark Watney faces his own imminent death. Thinking him lost in a dust storm, his crewmates have taken off to return to Earth, leaving Watney stranded on Mars. In the best Robinson Crusoe tradition, he has to figure out how to survive in the harsh Martian environment until the next mission arrives—which won’t be for another four years.

One thing that lifts this story above the usual marooned-on-a-desert-island tale is Watney’s voice which we hear almost entirely through the entries he makes in his log. He’s smart and funny and never gives up. Faced with a problem, he thinks about it and comes up with a possible solution, and if that doesn’t work he comes up with another. His MacGyver-esque repurposing of the things around him is fascinating. Watney is clear about his failures and limitations; sharing a name with a famous brand of beer, he makes no bones about his status.

Actually, I was the very lowest ranked member of the crew. I would only be ‘in command’ if I were the only remaining person. What do you know? I’m in command.

As well as being a survival story, this is also a rescue thriller. Once NASA realises Watney is alive, teams of people swing into action to find a way, amongst the strictly limited options, to bring him home. As the clock ticks away, the stakes couldn’t be higher for this high-profile rescue. NASA and the U.S.’s international reputations are at risk, not to mention Watney’s life. Of almost equal concern to Watney himself is the potential loss of the precious research he’s been able to conduct while marooned on Mars.

I found the switch to NASA and a third-person point of view a bit of a wrench since it didn’t occur till well into the story. By then I was deeply focused on Watney. I never completely regained that depth of focus, but introducing people and tensions back home provided some interesting contrasts and enabled us to follow the rescue efforts in a way we wouldn’t have been able to do if the point of view had stayed solely with Watney.

One of the best things about this novel is the science. Watney’s situation is so dire and his voice so entertaining that his explanations of the science behind his creative solutions are fun to read. The part that I’m familiar with was certainly accurate and the rest plausible. I love the idea of him being saved by science. And—mystery devotee that I am—I loved that so much of the story was about solving problems. It added to the realism and the tension that not all his solutions worked. The way he picked himself up after every failure was admirable.

My one complaint was the lack of insight into Watney as a person. We learn nothing of his family or his life back on Earth, whether he has a girlfriend, likes football, or whatever. There is a vague reference at the very end to a couple on Earth worrying and awaiting news, whom I assume to be his parents, but we aren’t told. We get a little insight indirectly through his need for human contact, which recurs throughout the story. He doesn’t paint a face on a volleyball, but he does think of his crewmates as he apologetically uses their belongings.

Generally in a novel, we want interior story arc as well as an exterior story arc. However, that is actually less common for the scifi/suspense/thriller genres. Also, since what we are hearing are his work logs, he’s less likely to share his inner feelings (except by swearing now and then). Still, for me it made the book feel a bit dry sometimes, and I’d have gladly traded a few bits of science for some personal information.

One theme that comes through in this story is how much a single life matters. What is the worth of one person? Call me cynical, but I didn’t quite believe that the U.S. government would come up with billions of dollars and cripple future space programs to bring home one astronaut. I know how hard it is for NASA and other such agencies to get funding.

Still, it is a good case study for ethics classes. It is one of those wicked problems for which there is no easy answer. Like most people, my heart is moved when a child falls down a well or a hiker is lost in the wilderness. Yet I also consider the human and financial costs of rescue missions. I respect the military’s “Leave no soldier behind” ethos, but would rescuing Watney really be the best use of resources? As a former welfare mother who watched people I knew starve and suffer and die for no other reason than poverty—poor nutrition, substandard housing, lack of medical care—I can’t help thinking how many lives could be saved by those dollars. It is much easier for our hearts to be moved by the plight of one person than that of thousands of people.

What book do you recommend reading in addition to seeing the film on which it’s based?

Note #1: Thank you to my Book Dissection Group for much of the insight included in this blog post. Opinions are my own, of course.

Note #2: Originally I included more examples of the humor, but I’ve deleted them so as not to ruin the punchlines for you. Read the book!