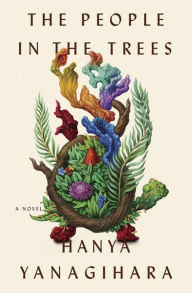 A newly-graduated doctor sent in 1950 on an anthropological expedition to an island in the South Pacific to find a lost tribe: sounds like it might be an adventure story. However, by making the bulk of this novel Dr. Norton Perina’s memoir, Yanagihara turns it into an intense psychological portrait of a thoroughly unpleasant man.

In the memoir, which is introduced and edited by his obsequious assistant Dr. Ronald Kubodera, Perina describes his childhood, isolated on a farm with his fraternal twin. The two spend their time torturing insects and small animals as well as their mother; Perina despises both his parents for their uselessness and lack of ambition.

After medical school his brilliance is finally rewarded by his inclusion on the expedition. Ivu’ivu is thought to be uninhabited and cursed, but Paul Tallent, leader of the expedition, has reason to believe it harbors a lost tribe who live to an advanced age. The description, through Perina’s eyes, of his first encounter with the jungles and people of Ivu’ivu is brilliant, vividly evoking the sounds and smells of this new world and Perina’s wonder and anxiety.

Perina’s discovery on the island and his amoral behaviour around it lead to fame and fortune and the Nobel Prize. However, we learn from the first pages that he is in prison for sexually abusing one of the 43 children he adopted from the island.

When I finished the book, I felt strongly that the pedophilia plot detracted from the story. It was nowhere near as intensely written as Perina’s trips to the island and seemed to be included purely for gratuitous shock value and to provide a climax at the end.

Perina’s story of his discovery and the consequences for Ivu’ivu and its people raise questions of power, colonialism and abuse of both nature and people. It also raises questions of how to evaluate a genius who is also a sociopath—a question much in the news of late as gifted and famous men are forced out amid revelations of abuse. That important and nuanced story did not need to be wrapped in a simple soap opera about pedophilia.

However, I later learned that, while the island and its tribe are fictional, Perina’s trajectory is based on the true story of a Dr. Carleton Gajdusek who won a Nobel Prize for his work among the Fore tribe in Papua New Guinea on kuru, a fatal disease. Gajdusek later went to prison for the same reason his fictional counterpart did. It may not always be the right thing to include every aspect of the story that inspired you.

This first novel shows some of the author’s strengths that made her second, A Little Life, a huge bestseller. She doles out information in such a way that for every question answered, new questions emerge, thus keeping the reader from getting too frustrated while maintaining the suspense. Her male characters—and all the primary characters are male—are deeply characterised, by which I mean that we have full confidence that she thoroughly understands all their formative experiences, their demons and angels, their subtlest shadings.

The weaknesses are here as well. The single female character is presented as an unpleasant stereotype, though this is only to be expected since we learn about her through Perina’s eyes. Perina is born into wealth and becomes much richer through his famous discovery. The fact that all four protagonists in A Little Life also became fabulously rich and famous was one of the factors that left me bored and unmoved by the story.

Worse, though, is that both narrators here are thoroughly unpleasant. I felt that way about the protagonists in her second book as well, though not everyone agrees with me.

Aside from their obvious pathologies, both Perina and his assistant are unreliable narrators. For example, Perina at one point claims that he went to Ivu’ivu solely for the adventure when it is obvious that he was desperate to be the center of attention. Equally he claims that his childhood torturing of insects, animals and even his mother is only what every small boy does.

What I did like about this book that I didn’t find in the second book is the attempt to grapple with serious problems. Because we are limited by Perina’s self-serving point of view, and notes by his loyal assistant, the issues of power, colonialism and abuse are sketched in broad strokes. In retrospect Perina is sorry for the changes he brought to the area, but unrepentant, saying any scientist would do the same, and he himself, knowing the result, would certainly do it all again.

The changes are so horrific, as are Perina’s crimes against the children, that we have no choice about what to conclude, both about these issues and the question of how to evaluate a genius who is also a sociopath. Still, obvious as our conclusions must be, it is good to be reminded of these horrors that continue to occur today.

We discussed the title in my new book group without coming to any conclusion. The tribe is not in the trees but in their village. Perhaps it is meant to remind us of the song Strange Fruit, though I think the comparison is strained; both peoples suffered tragically but differently.

We were also reminded of Euphoria, of course, the novelisation of a portion of Margaret Mead’s life. Though I disliked that book for its tampering with the facts of Mead’s life, it does approach the issues of colonialism and tampering with more depth and subtlety.

Still, this book is a good read if you can bear to spend so many pages with someone so awful. The writing keeps you turning page after page, and the psychological portrait of a narcissistic sociopath is brilliant.

Have you read a novel based on a real person? Did it change your view of the person?