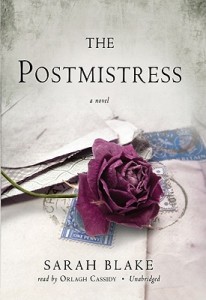 We don’t often reflect on just how amazing it is that we can put a letter in the post and know that it will arrive at its destination in a timely way. Iris James is the sole employee of the post office in Franklin, Massachusetts, a small town on the tip of Cape Cod. It is the fall of 1940, and the U.S. is holding off from entering the war. Meanwhile, Iris and her neighbors listen to the news coming out of London where the Blitz is flattening buildings and posters urging Londoners to Keep Calm and Carry On abound.

Many of the newscasts come from Edward R. Murrow but some people in Franklin are being drawn in by the voice of Murrow’s protégé Frankie Bard. She talks about the little moments that bring to life the horrors happening in London for the inhabitants of Franklin.

One of those inhabitants is Emma, new wife of the town’s doctor, Will Fitch. Orphaned during the flu epidemic of 1918, Emma has grown up feeling invisible, untethered as she is by human bonds. Meeting Will has changed all that, but Will has his own demons.

Franklin seems far away from the war and the U.S., like Franklin’s mob of summer tourists, is too busy being entertained to pay much attention to what is happening in Europe. “How easily the face of the world turns away,” Frankie thinks at one point. Yet the war’s reach is long.

Blake’s evocation of wartime London is brilliant; equally vivid is her portrait of quiet Franklin, where Iris takes comfort in the routine and order and consistency she can bring to her work in the tiny post office, holding the secrets of the town in her hands, as one neighbor tells her. I found Iris fascinating, yet for once didn’t mind moving between protagonists as the story shifted between the three women, because Emma and Frankie are equally fascinating.

I didn’t expect to like this book, despite (or perhaps because of) the effusive praise on the cover. One Thanksgiving when I was eight or nine, my cousin Bobby piled a lot of sauerkraut on my plate, and my mother made me eat it all. I’ve never been able to eat sauerkraut since.

That’s how I feel about novels set in WWII. I find it hard to read yet another one. My perception of the outsized number of WWII novels may be a function of my age. As the central event in the lives of my parents’ generation (along with the Depression), it was obviously a subject that stirred many writers and readers during the decades when I was growing up. And then there’s the aftermath of the war that I experienced. After my mother’s sentimental stories of the boys she danced with before they shipped out, no tragic wartime romance could seem anything but old hat. After the Eichmann trial, no Holocaust novel could shock me.

Yet Blake has found what for me is a previously unexplored corner of that war—twelve months while London is being bombed and the U.S. is trying to stay neutral—and used it to pose important questions.

How do we cope with our world being destroyed? You don’t know where the next bomb is going to fall; if you put a loved one on a train or ship to safety it may itself be destroyed. Is it better to keep them near? What do you do when you lose your home? Your neighbor? Your mother?

More importantly, how do we live our ordinary lives knowing other people are suffering these horrors? Frankie’s colleague Harriet has been collecting the brief reports and hints coming out of Germany describing what is being done to the Jews, but no one wants to hear about it. Iris’s friend Harry keeps a lonely vigil every night, convinced that a German submarine may be headed for Cape Cod, but others in town make fun of him. As Frankie asks Murrow:

“What are we doing back home, Ed? What are people doing, for Christ’s sake?”

Yet we do, even now.

Questions like these lurk in the background of this engrossing novel, while we follow the trajectories set in motion by the characters’ decisions and twisted by outside events, including an undelivered letter. Blake’s unsentimental yet compassionate tone makes us care about these characters even as she avoids the all-too-common pitfall of romaticising the war. I fell into the world of this novel and stayed there right to its satisfying conclusion.

Have you read a novel that you found both absorbing and thought-provoking?