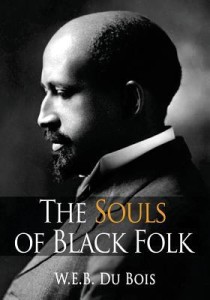 When my book club chose this book , I thought Really? Yes, I want to read more diverse books; yes I want to read classics. But would this 1903 book really have anything to teach me?

First off, the writing is amazing. Although I’ve known of Du Bois forever, I’d never before read any of his books. His prose is both expressive and straight-forward. These chapters are lessons in how to write about outrageous conditions with your outrage controlled and contained to add power to your sentences without turning the reader away. He marshals facts and numbers to back up his statements, yet doesn’t hesitate to move into lyric prose to bring home to us the reality of what he’s describing.

Second, yes, as a Caucasian who has tried to pay attention, I still have much to learn. I thought the whole book would be about conditions in the past. If only that were true.

Each chapter begins with the score of a spiritual, which I found myself humming as I read, adding another layer to the text. The chapters lay out a program of what is needed to bring the American Negro, particularly those in the South, into full citizenship: the right to vote, a good education—not just vocational training—and to be treated fairly.

He describes conditions just after Emancipation, particularly the Freedman’s Bureau. Much of this was new to me: the way Negro colleges grew and the idea that we had to start with the colleges and work down to the grade schools. Yet the political shenanigans described in later chapters, intended to return Blacks to virtual slavery, made my heart ache.

He talks about the role of the Black church and how music—what he calls the Sorrow Songs—grew out of slaves’ longing for freedom, traveled through the influence of the church and out to influence and be influenced by the White American culture. Having just watched Ken Burns’s remarkable exploration of country music, I was primed to recognise this primary source of America’s folk music.

The chapter that moved me most was the chapter on Alexander Crummell, an Episcopal priest who, according to Du Bois, was subject to three temptations: Hate, Despair, and Doubt. In Crummell’s story we see in a single tragic life the effects of what Du Bois names the Veil: an invisible barrier that separates Black and White Americans. White people do not comprehend what life is like within the Veil, the “double-consciousness”: “a sense of always looking at one’s self through the eyes of others, of measuring one’s soul by the tape of a world that looks on in amused contempt and pity.”

I learned a lot from this book. And even those things I already knew I came to understand more deeply.

Have you read this book, or anything by Du Bois? What did you think of it?