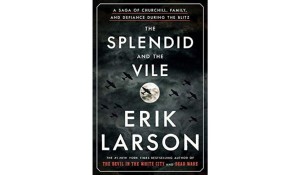 I hadn’t planned on reading more about WWII, having grown up in the shadow it cast, but I found A Woman of No Importance with its story of boundless courage and energy so inspiring that I couldn’t resist this book. Also, I knew I was in good hands with Larson, having enjoyed his previous books.

True to its subtitle A Saga of Churchill, Family, and Defiance During the Blitz, the story covers Churchill’s first year as prime minister. To say it was a tumultuous year is an understatement. When Britain declared war on Germany on 3 September 1939, then-Prime Minister Neville Chamberlain appointed Churchill First Lord of the Admiralty. Then when Chamberlain resigned on 10 May 1940, Churchill became Prime Minister. That same day, Hitler invaded Belgium, Luxembourg, and The Netherlands. The Dunkirk evacuation was only a few weeks later.

While I was already pretty familiar with events and people, Larson’s dramatic scenes and fast-moving action kept me engrossed. I was surprised by how gripping the story was, given that I already knew what was going to happen.

One factor, besides Larson’s skill as a writer, is all the new information from recently declassified files and intelligence reports—the amount of research Larson must have done is astounding. We get insight, not just into the workings and discussions of Churchill and his cabinet, but also into Hitler’s inner circle. The motivations and misunderstandings on both sides helped me understand some key decisions. We learn about the negotiations between Roosevelt and Churchill, who understood that Britain would fall without aid from the U.S.

Memorable anecdotes abound, such as Churchill’s aside after his famous “We shall fight on the beaches” speech. After he finished, Churchill said to someone near him, “‘And . . . we will fight them with the butt end of broken bottles, because that’s bloody well all we’ve got.’”

Also, Larson focuses on individuals, making extensive use of personal diaries and letters. We see Winston in private moments dancing at parties, wearing outlandish costumes. We hear his wife Clementine caution him to be less contemptuous and kinder to those around him. We follow their youngest daughter Mary and son Randolph’s wife Pamela as they navigate family and social life through this turbulent year. Churchill’s private secretary John Colville gives us unusual insight into the PM both in public and in private. We learn about the key roles played by newspaper baron Lord Beaverbrook and Federick Lindemann, a physicist and Churchill’s science advisor.

While I was fascinated by these private moments, my main feeling while reading this book was admiration for the courage of this flawed man who held his country together, even as Hitler expected them to surrender every day—surely they can’t hold out any longer! And for the British people themselves, who patiently put out the fires and swept up the rubble, patrolled fields and put up with appalling conditions in some of the shelters.

I was inspired by this tremendous example of leadership, and saddened too, considering where both the U.S. and Britain are these days. Larson’s book is more than an enjoyable read, more than a fascinating look into history’s public and private lives; it’s a brilliant primer on how to be a leader.

What book have you read about an inspiring leader?