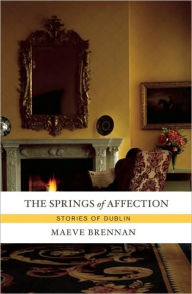 Maeve Brennan was a staff writer for The New Yorker, and by all accounts a colorful character. In his Introduction, William Maxwell described some of her antics such as hanging her large framed photograph of Colette by Louise Dahl-Wolfe on the wall above his desk, removing it later when he said or did something she didn’t like. One day it was back again. It came and went “like a cloud shadow. I never knew why and thought it would be a poor idea to ask.”

The stories in this book, all quite stunning, are set in Dublin where Brennan grew up. The first set seem to be autobiographical. They are in first person and the characters have the names of Maeve and her family. The home is the rowhouse on a dead-end street in a Dublin suburb where Maeve grew up.

Each recounts some incident—whether small, such as a man coming to the house to sell apples or the delivery of a new sofa, or large, such as a fire in the garage out back or raids by men looking for her father during a time of dissension between those in favor of a Republic and those supporting the Free State—but imbues it with such accuracy and character that it seems to hold a whole lifetime.

These stories remind me of writer and teacher Meg Rosoff advising us writers to look at the incidents that stick in our memory’s colander, those seemingly unimportant bits of the past. Yet there is a reason we remember them, and if we dig deeper we may be surprised by what emerges.

The second section is a series of stories exploring the particulars of Hubert and Rose Derdon’s unhappy marriage. Their only son John has become a priest, leaving Rose bereft. Over the course of the stories, details emerge about the family dynamics and the psychological burdens borne by the couple.

The stories in the third section are also about a marriage, not quite so fraught as the Derdons’ but held in a precarious balance. Martin and Delia Bagot lead mostly independent lives, he working late while she is responsible for the house, garden and two girls. However, the eponymous final story, told through Martin’s twin sister Min after the couples’ deaths, gives us a different slant on their relationship, though not perhaps the one Min intended.

What especially fascinates me about the Derdon and Bagot stories are the narrative scenes. As writers we usually balance narrative, also known as exposition, with dramatic scenes. These scenes usually have action and dialogue and conflict between characters. However, it is possible to write scenes that are all narrative. Usually writers are advised not to include long narrative passages, as they can be boring and slow the story to the point where momentum is completely lost.

However, a narrative scene is different, containing all the drama and emotion of an action scene. C.S. Lakin says, “What makes for great narrative scenes is the character voice.” I agree, but Brennan in these stories also shows the value of burrowing deep into her characters’ hearts and minds. Her astute understanding of their psychology, their fears and dreams, their upbringing and social context makes for stirring reading.

For example, 87-year-old Min is still furious about Martin having married Delia, even though both of them are now dead. She believes that his doing so broke up their family, saying of their mother:

. . . who had sacrificed everything for them and asked in return only that they stick together as a family, and build themselves up, and make a wall around themselves that nobody could see through, let alone climb. What she had in mind was a fort, a fortress, where they could build themselves up in private and strengthen their hold on the earth, because in the long run that is what matters—a firm foothold and a roof over your head. But all that hope ended and all their hard work was mocked when Delia Kelly walked into their lives.

This is telling about something that happened instead of showing it in a scene with action and dialogue. Yet it works, because of the vivid language, the voice—can’t you just hear Min?—and the accuracy and precision of the author’s insight into this character.

As I closed the book, moved by Min’s unconscious revelations about herself and by the two couples and Maeve herself as a child, I found myself thinking about my own childhood. Like Brennan, like all of us I suspect, those early years of family and the house that contained us have almost mythic status in my imagination. I can understand how she wanted to return again and again to that well of inspiration.

Have you read a collection of short stories that you’d recommend? Perhaps they carried you away to a faraway place or gave you a new understanding of human nature? Perhaps they introduced characters whom you can’t seem to forget?