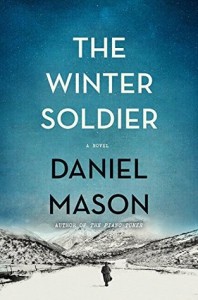 Many people recommended this 2018 novel to me, and it is indeed precisely the sort of novel I enjoy. In truth, I like different kinds of novels depending on my mood and what else is going on in my life, but often what I lean toward is a serious, accomplished novel without a lot of look-at-me meta-tricks, one that uses a small frame to explore big ideas.

Lucius is a 22-year-old medical student in Vienna in 1914. The only child of a wealthy family, he is a disappointment to the parents who want to see him become a famous diplomat or war hero. Yet his passion is for medicine, so much so that he has no time for anything else, his only friend a fellow student. The war promises to release him from the, to him, useless lectures at his school and enable him to treat actual patients. Also, like so many others at the time, he has a romaticised vision of war.

Instead of a bustling hospital where he can get clinical training, Lucius is posted to a remote field hospital in the Carpathian Mountains. where he is the only doctor. The commandeered church is freezing; supplies and equipment are minimal, and there’s an outbreak of typhus among the patients. He has a few untrained helpers and one nursing sister, who quickly notices Lucius’s lack of practical knowlege and unobtrusively teaches him.

Among his patients are several with “nervous shock” including the silent Horvath, whom they call the winter soldier. Lucius begins to suspect that this newly defined ailment goes beyond the physical illnesses of his training, that they are at least partially psychological. His sympathy for his patients is sorely tried by the primitive treatments he has to offer and by the army’s demand that he patch them up enough to send them back into combat.

Despite the support of the level-headed sister, Lucius’s missteps, the hardships he has to endure, and the cruelties he witnesses lead to his own PTSD. Some of the scenes are grisly and devastating to read, but there are also scenes of grace and beauty. Balancing the two is perhaps Mason’s most impressive achievement.

Also impressive is his ability to bring these different mileaus to life, the gilded mansions of Vienna where we start, the terrible winter journey to his first posting, the war-ravaged village on the eastern front. While this is a story about WWI, it is not about trenches and battles. It is a small, human story powered by big ideas, not just the romance/reality of war itself and the emergence of what we now call PTSD as a recognised illness, but also the unlikely connections that save us, the small mistakes that have large consequences, hubris, guilt, atonement. It is a brilliant evocation of this moment when everything about the world changed.

Have you read a WWI novel not only captured your attention but also gave you new insight?